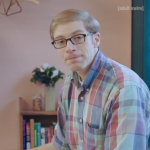 Joe Pera is an American stand-up comedian, writer, and actor based in Michigan. He is best known as the creator and star of Adult Swim's network show, Joe Pera Talks with You to sleep first aired in 2016. He is also recognized by a massive number of mass all around from his other famous TV show series, The Pancake Breakfast Critic (2014). How To Make It In USA(2015), The Perfect Week(2014), Shooting Hoops With Joe(2014) and several other stand up and uncategorized videos. Joe also cohosts a standup show called 'Dan+Joe+Charles Show' at the NY Distilling Company in Brooklyn (79 Richardson St) every Tuesday at 8:30 pm.

What is Joe Pera famous for?

Joe Pera is best Known for his slow, "grandfatherly" delivery and his penchant for wearing sweaters, who created and starred on the Adult Swim's show Joe Pera Talks You to Sleep aired since 2016. Joe Pera is an actor and writer also known for his appearance on shows, The Pancake Breakfast Critic (2014) and Joe Pera Helps You Find the Perfect Christmas Tree(2016). He has also pulled much attention after he appeared on "Late Night with Seth Meyers" on 9 May 2018.

Where is Joe Pera from?

Joe Pera was born as Joseph Pera in Buffalo, New York, US in on 24 July 1989. Details about his parents, siblings and childhood life are not yet revealed by him. He is an American nationality and he belongs to white ethnicity. His religion is Christianity and his zodiac is  Leo. He studied film at Ithaca College, where he competed and won the college’s stand-up competition three times. After that, he moved to New York City to pursue comedy and started attending open microphone night events in the early days.

What is Joe Pera's occupation?

Joe Pera is currently working on his TV show, Joe Pera Talks with You first aired in 2016 from his own created and starred show program, Adult Swim. He began his comedy career with the role of Zero Fucks Boyd in the program, The Chris Gethard Show in 2013. The following year, he appeared in New Timers as Myron. Pera produced the show called "The Pancake Breakfast Critic" in 2014. His colossal leap and fame were in 2016 when Joe created and starred on his show Adult Swim’s called Joe Pera Talk You to Sleep and Joe Pera Helps You Find the Perfect Christmas Tree. Besides, appearing in TV shows, Joe has played the role of Jim in the 2017 movie called Snowy Bing Bongs Across the North Star Combat Zone. He has also appeared in TV talks like Late Night with Seth Meyers in 2018 and The Late Show with Stephen Colbert in 2019. Joe is also co-hosting a standup show called 'Dan+Joe+Charles Show' at the NY Distilling Company in Brooklyn every Tuesday at 8:30 pm in 2019.

Joe Pera is a married man. He is married to a beautiful lady named Lakeisha and The duo already has two adorable daughters. There is not much information on his wife or children. He has not disclosed their details so far. It appears he wants to keep his family and private life to himself for now. Sometimes, he mentions his wife on Twitter. However, no other information is provided by him so far and also the media is clueless. He is currently living with his wife and children happily in New York, NY.

What is Joe Pera's net worth?

The distinctively famous and unique comedian icon, Joe Pera net worth is estimated at 1 million dollars as of 2019. His major source of income is his Adult Swim's show series. He also earns by performing and co-hosting stand-up comedies on a show 'Dan+Joe+Charles Show' at the NY Distilling Company in Brooklyn (79 Richardson St) every Tuesday at 8:30 pm. Also with the help of his successful shows, like Joe Pera Talks You to Sleep he has launched the company, chestnutwalnutunlimited for producing and managing similar shows. Further information on his cars and houses are still under review.

How old is Joe Pera?

The Adult Swim show star, Joe is now 30 years old and he seems very healthy and fit as of today. He has a good body built and proportion. In appearance, he has red hairline color hair with a pair of blue eyes. He has a distinctively unique style to deliver his shows and personality. He is a great actor in his genre. He quiet handsome but usually puts on a jacket and dress up like an average old man. He wears power glasses too. Exact information on his body height, mass, body measurements, shoe and dress sizes are still under review. He has a straight sexual orientation.