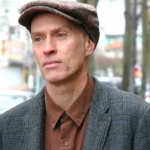 John Mann was a Canadian rock musician, actor, and songwriter who was best known as the frontman of the folk-rock band "Spirit of the West". He gained popularity through the band "Spirit of the West. His songs were so popular that they became a part of the Canadian drinking tradition. On November 20, 2019, Mann passed away at the age of 57 after he was diagnosed with Alzheimer's disease at the age of 51.

What was John Mann Famous for?

Where was John Mann Born?

John Mann was born on September 18, 1962, in Calgary, Alberta, Canada. His birth name was John Fraser Mann. His nationality was Canadian. His ethnicity was White while Virgo was his zodiac sign. Mann was raised in his hometown after which he moved to Vancouver, British Columbia, to study theatre at Studio 58.

After then, in 1983, he left Studio 58 and then co-founded the popular folk-rock band, "Spirit of the West". In 1984, the band released its first independent album.

Who was John Mann Married to?

The rock musician, John Mann was married to his beautiful wife, Jill Daum. Daum is a popular Canadian actress and playwright. The couple together have two children: a son, Harlan and a daughter, Hattie who are given the surname Daumann. His son, Harlan Daumann is also a musician. Besides, the couple's honeymoon in Venice was the subject of one of Spirit of the West's most successful singles, "And if Venice Is Sinking".

What was the Cause of death of John Mann?

He even faced the memory issues during his acting performances as far back as 2001. Mann even underwent a stem cell procedure in hopes of helping his Alzheimer's but it couldn't get helped and he died on Nov 20, 2019.

What was John Mann's Net Worth?

The 57 years old late musician, John Mann had great earning through his professional career from his several concerts, albums, and many others. Mann had managed to amass a fortune worth million dollars throughout his 36 years in the music industry. Mann's current estimated net worth was around $5 million.

How Tall was John Mann?