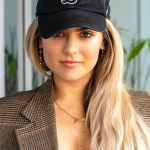 Joanna Noelle Blagden Levesque, better known by her stage name, JoJo, is an American vocalist, songwriter, and actress. She rose to fame after participating in the television show America’s Most Talented Kids in 2003 and gained immense popularity as she was only thirteen. With the release of her self-titled debut album in June 2004, she became the youngest artist ever to top the US Billboard Pop Songs chart.

Over the years, He has dropped several albums, singles, EPs as well as starred in films and TV series. She’s dominating the music charts for over a decade, thanks to her soulful voice, vast vocal range and of course unmatched beauty. Let's explore more about her through this article.

What is JoJo famous for?

When was JoJo born?

Recalling her early life, JoJo was born in Brattleboro, Vermont, the U.S. in the year 1990 as Joanna Noëlle Blagden Levesque. She is the daughter of Joel Maurice Levesque and Diana Levesque (née Blagden). Her mother sang in a Catholic church choir and was trained in musical theater. She was raised by her mother after her parents divorced when she was four years old.

She has English, Native American, French, Polish, Irish, and Scottish ancestry. She is of American nationality and her birth sign is Sagittarius. Similarly, she was Christianity by religion.

Where is JoJo educated?

Concerning her education, JoJo graduated from high school in 2009. She was accepted to Northeastern University where she considered majoring in cultural anthropology but did not attend.

When did JoJo begin her singing career?

Who is JoJo dating now?

Reflecting on her personal life, JoJo dated American soccer player, Freddy Adu from May 2005 until September 2006. And then in 2008, she began dating Jeremiah McConico but their relationship also didn’t last long.

Aside from singing and acting, She is also a supporter of various charitable organizations such as the Boys and Girls Club of America, World Vision, She's the First, Make A Wish Foundation and others.

How much is JoJo worth?

Being a part of the entertainment industry, JoJo earns a decent amount of money and fame through her profession as an actress and R&B/pop singer. Based on some online reports, her estimated net worth said to be $7 million at present. However, her salary and asset details are yet to be disclosed.

How tall is JoJo?

Observing her body physics, JoJo stands a height of 5 feet 3½ inches and weighs around 56 Kg. Similarly, she has an average body with a body measurement of 37-27-35 inches. Further, she has a pair of gray eyes and lights brown hair color. She used 6 (US) shoe size and 10 (US) dress sizes.