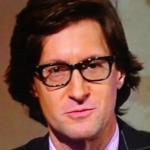 Jonas Max Ferris is an American economic analyst, economist, and investment advisor, who is best known for his work as a panelist for the Fox Business Network(FBN)'s program entitled, “Cashin’ In”. His appearance on the show has earned him much recognition and popularity throughout the years.

He is also the producer known for "Mornings with Maria Bartiromo"(2014) and "If the Trees Could Talk"(2014). Apart from that, Ferris is also the co-founder and president of Maxfunds.com Inc. in Ann Arbor, Mich. Besides, he is also known to be the husband of American Fox Business analyst, Dagen McDowell with whom he has been married for over 16 years as of 2021.

What is Jonas Max Ferris Famous for?

Where is Jonas Max Ferris From?

Jonas Max Ferris was born on September 13, 1971, in Southfield, Massachusetts, United States. His birth name is Jonas Max Ferris. His nationality is American. Ferris belongs to the White ethnicity while Virgo is his zodiac sign.

Who is Jonas Max Ferris's Wife?

Jonas Max Ferris is a married man and has been married just once to date. His first marriage and the only marriage was with Dagen McDowell. Dagen is also a popular American anchor and analyst on the Fox Business Network and a business correspondent for the Fox News Channel, with whom he met for the first time when both of them were on the show "Cashin’In", however they went through a lot of arguments on the show.

At the time of their first meet, Dagen was married to her first husband. After getting to know each other for more, they got married in 2005 and are still together for over 16 years now. The couple however hasn't any children yet. They have adopted a Chihuahua named Ramon and a puppy.

Jonas Max Ferris has quite good earnings from his professional career as an economic analyst, economist, and investment advisor. Having his career started in 1993 with a small start, Jonas has managed to come a long way up becoming one of the most popular journalists and Fox Business Network(FBN)'s personnel. Even so with his popularity, he isn't active on any social media sites.

His source of income is surely his appearances on his show, “Cashin’ In” and several other shows. Including which he has an estimated net worth of around $5 million.

Jonas Max Ferris is a good-looking man with an average body physique in his 40s. He stands tall with a height of 5ft. 6inch.(1.68m) while his body weighs around 65kg. He has a fair complexion with light brown hair and dark brown eyes.