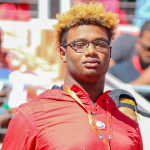 Jordan Burch is an American footballer who's been widely famous for being the 5 stars rated defensive end footballer in 2020 class of private school state leagues competing from Hammond High School in Columbia, S.C. He got wide attention after he committed to South Carolina, a state that annually produces top-ranked defensive linemen who hold the potential to develop into an all-league and All-American sort of player. Burch is now boasted in the top 20 of 247Sports' in composite rankings. Burch's rating is 0.9977, making him the second-highest rated recruit in Gamecocks history. He's the No. 5 rated overall prospect in the 2020 class, and the No. 2 defensive end.

What is Jordan Burch famous for?

Jordan Burch is best famous for being the 5 stars rated defensive end footballer in 2020 class of private school state leagues competing from Hammond High School, Columbia, S.C. Burch has widely gained the attention of huge masses and big footballer clubs because of his 9 out of 10 like the score in every perspective of physical abilities and skills in his games in 2019.

Where was Jordan Burch born?

Jordan Burch is a native of Columbia, South Carolina, USA however where he was born and who are his parents are still not known and are currently under review. Also, his sibling's information, religion, horoscope, etc are still undergoing review. He is currently playing as a footballer from Hammond High Shool base in Columbia, SC. He is now  18 years old.

Where did Jordan Burch commit?

The Five-star rated defensive end Jordan Burch from Hammond High School made his official announcement on ESPNU, commitment to South Carolina at "2 p.m. hour" on Dec 18, 2019. Burch has finally chosen to go for South Carolina School state. He had offers from other top schools like Clemson, Alabama, Georgia and LSU in addition to other few local programs. Burch originally had twitted on Twitter that he would be announcing his college on Thursday, December 19, 2019. However, He changed his commitment date which was known after he twitted in Twitter revealing his announcement date ahead of his preset signing period on Dec 16, 2019.

When did Jordan Burch start his football career?

Burch started competing in Private School leagues from his current academy, Hammond High School based in Columbia, SC. He played from the school's football team called Boys Varsity Football, beginning from 2017 till now. He is also a basketball player and is in his school's basketball group as well. He started his initial football career by competing in a match held in Ben Lippen School and then he competed in Orangeburg Prep High School. In the following years he then frequently progressed and get to compete in over 50 schools league competitions. He rose to huge fame after his big game, Hammond vs PAC Game Highlights held on Dec. 4, 2019.

He had a record of 62 tackles and 10 sacks as a junior player last year. This year he has credited record near 20 sacks. Coming to 2019, he has committed to play football from one of the last championship holder school state, South Carolina. Burch has established himself as Five-star DE in the 2020 class of football.

Who is Jordan Burch's girlfriend?

There is no information regarding his personal life as of now. Jordan is now an all-around 5-star footballer who holds the potential to compete in big platforms like NFL. He is currently focused in his career and there seems to be no one his life currently with whom he could be the romantic bond.

What is Jordan Burch's net worth?

The Columbia (S.C.) Hammond High School's five-star defensive end Jordan Burch's current net worth is still not known and is under review. Similarly, his average salary is still not known. He has been competing in football since 2017 till now and he has made a huge name for himself in it. So he must be earning a decent amount of money. Since he is competing in School State leagues and has not made his debut in the big one like NFL, his current net worth may not be peaking to millions just yet but as he has progressed in such measures we can assume he is soon going to make money in millions in near future.

How tall is Jordan Burch?

The first five-star footballer in this 2020 class, Burch stands a giant like the height of 6 feet and 6 inches. He weighs the massive weight of around 275 lbs. To describe his body, He possesses a huge square-shoulders and well-proportioned athletic build with a strong base. He is like an all-time winner who has won a state championship every season in South Carolina’s private school leagues. His other body states, appearances, dress size and shoe size are currently under review. He has a straight sexual orientation.