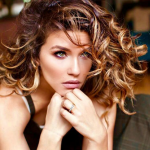 Juliana Harkavy is an American actress. She is known for portraying Rebecca in Dolphin Tale, Jessie in To Write Love on Her Arms, and Alisha in the television series The Walking Dead. Let's look at her wiki, to get more information regarding her career, net worth, personal life.

What is Juliana Harkavy Famous for?

Where is Juliana Harkavy born?

Back to her early life, Juliana Harkavy was born in New York City, New York, the United States to Berta Carela and Michael Harkavy. Her birth name is Juliana Jay Harkavy. She grew up along with her brother August Harkavy. Her father is a former Senior Vice president of Warner Bros. Entertainment Worldwide Publishing, Kids' WB Music, and Warner Bros. Interactive Entertainment.

When did Juliana Harkavy pursue her acting career?

Who is the husband of Juliana Harkavy?

Along with her successful career, Juliana Harkavy has a successful married life too. Well, the 33 years old renowned actress Harkavy is married to husband, Peter Christopher Kupchick. The couple tied the knot on 19th June 2014.

They are happily enjoying their married life. Although the couple is already married, they do not have any kids yet. Furthermore, they haven't mentioned any plans of having kids too. Since their marriage, Harkavy and Peter have maintained a peaceful relationship without facing any rumors of divorce.

Harkavy often shares beautiful pictures of her husband on Instagram. Besides this, Harkavy hasn't been in any other relationships.

How much is Harkavy's net worth?

Juliana Harkavy has maintained a standard life. Since her childhood, she is still active in the field of acting From her acting career, Harkavy earns an astonishing amount of money. However, her current exact figure of net worth is still under review.

Harkavy owns three bulldogs worth $800-$2000. During her holidays, she often visits new places with her husband and friends.

How tall is Juliana Harkavy?

Observing her body statistics, Juliana has been standing with a perfect height of 5 feet 8 inches (1.73 m) and weighs around 56 kg. She has a slim body with dark brown hair color. She has a very sexy figure and her body measurements read 32-34-32 (Brest- Waist- Hip). Her feet are size 7 standards US size.