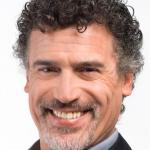 Julio Milostich is a Chilean theater, film, and television actor who is well known for his role as General Bernardo O'Higgins in the TV miniseries, "Héroes". For his acclaimed role as José Luis Echeñique in the soap opera, "El Señor de la Querencia", he won several awards; APES Award and Copihue de Oro Award. Having his career started in 1988 he has been working for over 20 years in the field now having acted in over 10 movies and 20 TV shows.

Milostich gained much recognition for the cynical and morally antagonistic style of characters that he played making him an unconventional heartthrob. With his growing popularity, he has managed to amass a healthy fan following of over 22k followers on his Instagram account: @juliomilostich.oficial.

What is Julio Milostich famous for?

Where is Julio Milostich from?

Julio Milostich was born on October 5, 1966, in Punta Arenas, Chile. His birth name is Julio Pelegrin Milostich Muñoz. His nationality is Chilean. His ethnicity is mixed while Libra is his zodiac sign.

Born as one of the six children of his parents, Julio was raised alongside his five siblings by his mother, Magdalena Muñoz after his father died soon. His mother struggles to raise the six children on her own.

He attended the E-20 school after which he went on to study at the Liceo Salesiano San José, in Punta Arenas. Growing up, he knew what he wanted to pursue for which he migrated to Santiago to study at the DRAN School of Dramatic Art in 1986.

Julio Milostich's material status isn't clarified yet. He hasn't disclosed any information about his dating life.

Julio Milostich has earned a good amount of money from his profession as an actor. His career as an experienced actor having played in theater, film, and television has surely earned him quite a good fortune.

Having acted in over 10 movies and 20 TV shows, Julio has great earnings estimated to be around $1.2 million.

Julio Milostich is a handsome man with an athletic body physique in his mid-50s. He stands tall with a height of 5ft. 7inches.(1.73m) while his body weighs around 70kg. He has a fair complexion with black curly hair and a pair of brown eyes.

Trivias About Julio Milostich You Need To Know.