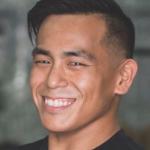 Julius Naranjo is a Guamanian weightlifter, coach, and filmmaker. A record holder in the 69 kg weight category, he represented Guam's National Weightlifting Team at various events. However, he retired from the sport due to a career-ending back injury. He is currently a weightlifting coach and coaches the Filipino weightlifter Hidilyn Diaz whom he married in July 2022.

What is Julius Naranjo Famous For?

Everything To Know About Hidilyn Diaz

Where is Julius Naranjo From?

Julius Naranjo was born on 14 June 1991. His full name is Julius Irvin Hikaru T. Naranjo. He was born in Tamuning, Guam in the United States. He holds dual nationalities, Amerian, and Filipino. He belongs to the Asian ethnicity. His father is Filipino and his mother is Japanese. He has 3 younger siblings. He follows Christianity and his star sign is Pisces.

Regarding his educational background, he attended Father Duenas Memorial School. After completing high school, he attended the University of Guam. He graduated with a Bachelor of Sciences in Exercise Science & Health Promotions with a minor in Nutrition in 2013.

Who is Julius Naranjo Wife?

Julius Naranjo is a married man. He is married to Hidilyn Diaz. She is a Filipina weightlifter and airwoman who is the first Filipino to ever win an Olympic gold medal for the Philippines. She holds an Olympic weightlifting record in the women's 55 kg category. They first met at the 2017 Asian Indoor and Martial Arts Games where weightlifter Naranjo was competing. He later became Hidilyn's coach. The couple got married on 26 July 2022.

What is Julius Naranjo Height?

Julius Naranjo stands around the height of 5 feet and 2 inches tall. He has a body weight of around 70 kg. He has an athletic body build. His eye color is brown and his hair color is black.

What is Julius Naranjo Net Worth?

A former competitive weightlifter, he holds a record in the 69 weight category. After a career-ending back injury, he became a weightlifting coach. He earns from his coaching career and serves as weightlifting coach, strength & conditioning coach, and team manager for Team HD, the Olympic Core team for Hidilyn Diaz. He is also a filmmaker and works in film productions mostly related to weightlifting. At present, his net worth is estimated at $1 million.