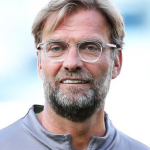 Jurgen Norbert Klopp, one of the famous German Football Manager and Manager of Premier League club Liverpool popularly known as Jurgen Klopp. Previously, he is a football player. He is well known German celebrity. He is famous for contribution in professional life. His is best at striker and defender position. Currently, he is the manager of Liverpool Club. He had played for SV Glatten, Mainz 05 and many more.

Passionate and enthusiastic Coach was born on 16th June, 1967. He was born and raised in Stuttgart, city of Germany. He is the son of Norbert Klopp and Elisabeth Klopp, his father and mother. His nationality is German. His astrological sign is Gemini.

Talking about his body, his height is 1.93 m. His weight is of 83 Kg. He has balanced body with good health.

On 27th February, 2001 he was appointed as the club's manager after his retirement from Mainz 05 club. Klopp remained for 7 years as manager where he led the team to its first appearance in the Bundesliga and qualification for the 2005–2006 UEFA Cup. He resigned at end of 2007–2008 season with a record of 109 wins, 78 draws and 83 losses.

Klopp become the new manager of Borussia Dortmund signing a 2 year contract at the club on May 2008. He took this club to 6th place finishing his first season and 5th place finishing next season. During the 2011–2012 Bundesliga seasons, this club made 81 points was the greatest points in Bundesliga history. Later, the points made by Dortmund in the 2011–2012 seasons were broken by Bayern Munich in the 2012–2013 season. Then due to this Dortmund lost the German Super Cup in 2011. On 12 May 2012, he made this club history with the club's first ever domestic double, by defeating Bayern Munich with score of 5–2 to win the 2012 DFB-Pokal Final. During the 2012–2013 seasons, this club was not as impressive as in the previous. Dortmund finished the 2013–2014 seasons in 2nd place. Also during the 2013–2014 seasons, Dortmund won the German Super Cup. He finished with a record of 179 wins, 69 draws and 70 losses for this club.

Klopp agreed a 3 year deal to become Liverpool manager on 8th October 2015. Klopp secured his first win as Liverpool manager against Bournemouth in the League Cup on 28th October, 2015. Liverpool lost the game against Manchester City on Penalties with score of 3-1 on 28th February, 2016. On 2017 of 21st May, he made his team qualified for the Champion League for the first time since 2014-2015.

In May, 2018 Liverpool qualified for the 2018 Champions League Final winning over Roma in the semi final and later lost against Real Madrid with score of 3-1.

Klopp is a married man. He had married twice. Previously, he married to Sabine and also they had a son together. Later, he married to Ulla Sandrock, Social worker and Children's writer.

Net Worth of Jurgen Klopp