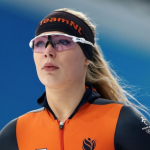 Jutta Leerdam is a Dutch speed skater specializing in sprint events. She is among the top speed skater of her country the Netherlands and has also represented the country in Olympics and World championship events. She competed at the 2022 Winter Olympic Games and won silver at the women's 1000m events.

What is Jutta Leerdam famous for?

Where was Jutta Leerdam born?

Jutta Leerdam was born on 30th December 1998 in 's-Gravenzande, a town in the province of South Holland, in the Netherlands. Her birth name is Jutta Monica Leerdam. She holds a Dutch nationality and belongs to the white ethnicity. Her star sign is Capricorn. She is a follower of Christianity.

Leerdam was born into a middle-class family. Her father named her Jutta because he was a fan of German windsurfer Jutta Muller. In fact, Surfing is the favorite sport of her father, and had always wanted her daughter to be involved in sports. It was her mother who raised little Leerdam with great care and love.

After graduating with a diploma from the Hogeschool Rotterdam, she began studying for a bachelor's degree in marketing and commercial economics from the Hanze University of Applied Sciences in Groningen, Netherlands. She has also studied at the Johan Cruyff Academy in the Netherlands.

Jutta Leerdam is currently dating the 31-year-old speed skater Koen Verweij. Like Jutta, he was also born in the Netherland and holds Dutch nationality. He won silver at the 2014 Olympics games in the men's 1500m event. The duo first met each other in 2016. Before their meeting, they had already known each other due to their public figure status but hadn't known each other personally.

What to know about Koen Verweij?

After a series of conversations and casual talks while their campaign at Dutch Championships, they gradually began to like each other and became very close which resulted in their love relationship. It is assumed that the love birds began dating in the year 2018. Due to their same profession, Jutta and Verweiji are always seen together and happen to maintain a healthy relationship. Hope their relationship will blossom in the upcoming days.

As of February 2022, the net worth of Jutta Leerdam is estimated to be US $500k to $1 million. She has accumulated her fortune through her successful skating career. As a prolific speed skater, she earns around $20 thousand to $50 thousand from participating in Dutch Championships, European Championship, and World Championships. A major part of her income comes from endorsement deals too.

Jutta Leerdam is Kamila Valieva is 6 ft 0 inches tall and her body weight is around 62 Kg. She has an Athletic build hourglass-shaped attractive body. Her curvaceous body measures 31-23-35 inches. She wears a 36B (US) size bra and feels comfortable wearing 9 (US) size shoes.

She looks elegant in her long and silky hairstyle that is blonde in color. She has a pair of sparkling blue eyes. As a Figure skater, Valieva regularly does single-leg deadlift/balance, Jump squats or jump lunges, star jumps, Skipping, and Rotation jumps to improve her skating power.