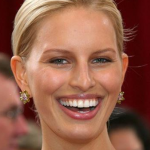 One of the very famous, Model as well as Actress is Karolina Kurvoka, who is best known as a former Victoria's Secret Angel and Vogue cover star.

The very beautiful Karolina Kurkova is a professional model. She is former Victoria’s secret model and an aspiring actress. She is also one of the top fashion models of today’s time. She was born on February 18, 1984 at Czechoslovakia. She belongs to Czech nationality. Her father is name is Josef Kurka. He was a basketball player of his time. He married a Slovakian wife. During her childhood, her friends made fun of her height. But who knew she would make it so big in the fashion industry one day.

Karolina stands tall at five feet and eleven inch. She got the look and has the perfectly sculpted body. Her workout routine and a strict diet regime have helped her achieve that sexy and perfect look. And therefore, she effortlessly rocks any bikini shoot. She oozes confidences while on the runway. She can definitely set the ramp on fire. She has been featured in numerous glamour magazine covers too. Vogues, Elle, GQ are to name a few. Overall, she has perfect body type for being Model.

She is everything a super model needs to be. She is extremely professional and hardworking. She looks great. She manages to get herself noticed while on ramp. And even while she’s not in the limelight, she always looks her best. She’s got the perfect body and those long, sexy and toned legs to die for. She puts on clothes that brings out her best assets. Her hair and makeup are always in check. Thus, she always looks glamorous without any effort.

Net Worth of Karolina Kurkova

At present, she is among the world’s highest earning models. She has the estimated net worth of $ 58 million dollars. Her salary is $3.5 million. She is so young and has already achieved heights which would require others lifetime to accomplish. It shows her dedication and love towards her profession. She definitely has worked her best to accomplish whatever she is of today. Apart from modeling she has also started her career in the acting too. She made her silver screen debut in 2007 with ‘My sexiest year’. Her short acting history is well framed in the Wikipedia for her fans.

In 2009, the gorgeous model Karolina married her husband Archie Drury. He proposed to her while they were vacationing in Cape Town, South Africa. The beautiful couples have a son together named Tobin Jack Drury on October 29, 2009. She is leading a blissful family life. There is no sign of separation between them. They are happy and madly in love with each other. She is at present residing in New York with her partner and her three year old son.

Trivias About Karolina Kurkova You Need To Know.