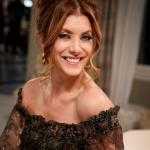 Kathleen Erin Walsh, popularly known by the name Kate Walsh is an American actress and businesswoman. She started her career being a model. She is famous for her role as Dr. Addison Montgomery on the ABC television dramas, Grey's Anatomy, and Private Practice. She is also known for her role as Rebecca Wright on the short-lived NBC sitcom Bad Judge, and Olivia Baker on the Netflix drama series,13 Reasons Why.

Kate Walsh was born on 13 October 1967. Her birth name is Kathleen Erin Walsh. She was born to a father, Joseph P. Walsh, and a mother, Angela C. Bochetto. Her father is Irish, native of Navan, County Meath, whereas her mother is of Italian descent. Her birth place is San Jose, California, in the United States. She holds American nationality. She belongs to White ethnicity. Her zodiac sign in Libra. She has two siblings, Joe Walsh, and Sean Walsh. She grew up in Tucson, Arizona.

She attended Catalina Magnet High School for three years. Later, she graduated from Rincon High School. After graduating from high school, she attended the University of Arizona to study acting. She also attended Piven Theatre Workshop in Chicago, where she took acting lessons.

She joined the comedy troupe, Burn Manhattan and worked as a waitress to support herself.

She used to work at Burger King and Dairy Queen before pursuing her modeling career.

In the 1980s, she began her career as a model in Japan, where she taught English.

Later, she moved to Chicago and worked with the Piven Theatre Workshop.

She also performed on National Public Radio in the production of the radio play Born Guilty.

She made her television debut in an episode of an American police procedural television series, Homicide: Life on the Street in 1996.

She also appeared in minor roles in Swift Justice and Law & Order.

She got her major role as Nicki Fifer in an American sitcom, The Drew Carey Show from 1997 to 2002.

She landed the guest role of Dr. Addison Montgomery in the American medical drama television series, Grey's Anatomy in 2005. She became the main cast of the series in the season 2 and 3. She later appeared as special guest star in Grey's Anatomy from season 4 to season 8.

She also appeared in the lead role of Dr. Addison Montgomery in an American medical drama television series, Private Practice from 2007 to 2013.

She appeared in the lead role as Rebecca Wright in an American legal comedy television series, Bad Judge from 2014 to 2015.

She has been appearing as Olivia Baker in an American teen drama web television series, 13 Reasons Why since 2017, where she appears as the mother of a child who commits suicide.

She made her film debut 1996 American crime drama film, Normal Life, where she appeared as Cindy Anderson, sister of a bank robber.

She then later appeared in small roles in various films including Peppermills, Night of the Lawyers, Henry: Portrait of a Serial Killer, Part II, Three Below Zero, Heaven, The Family Man, Anatomy of a Breakup, A Day in the Life of Nancy M. Pimental, Under the Tuscan Sun, and After the Sunset.

She got major recognition after appearing as Barbara Weston in the 2005 American sports comedy film, Kicking & Screaming.

She later appeared in Inside Out, Bewitched, Veritas, Prince of Truth, One Way to Valhalla, Legion, Angels Crest, The Perks of Being a Wallflower, Scary Movie, Dermaphoria, Just Before I Go, Staten Island Summer, Any Day, Girls Trip, Mark Felt: The Man Who Brought Down the White House, and Reality High.

She made her off-Broadway debut in May 2010. She appeared opposite to Paul Sparks in Atlantic Theatre Company's world premiere of Stephen Belber's Dusk Rings a Bell.

She also had a long theater career in Chicago. She appeared in the plays Happy Birthday Wanda June, The Danube, Moon Under Miami, Troilus and Cressdia.

She was a member of the improvisational comedy troupe Burn Manhattan and the New York City Players theater ensemble.

She founded a beauty and lifestyle company, Boyfriend LLC in 2010.

The company launched its first product, a perfume called "Boyfriend" in November 2010.

She and HSN partnered to launch the "Boyfriend" fragrance with live appearances by the actress/entrepreneur on HSN, November 11 and 12.

She also released eight webimercials via various social media to promote her fragrance.

She was previously married to an American film and television producer, Alex Young. They started dating in April 2007. The two tied a knot to each other on 1 September 2007 at the Ojai Presbyterian Church. Young filed for divorce in December 2008 and they got divorced three years later in 2010. Later, she was romantically linked with Neil Andrea, Chris Case, and Trevor Davis.

She revealed in September 2017 that she was diagnosed with a benign meningioma earlier in 2015. Her tumor was removed successfully after undergoing surgery. She took a 9 months break to recover.

Net Worth, Source of Income, Business

She was the brand ambassador of CTS between 2007 and 2008. She is also into the business and has launched various of her own perfume brands. She has also appeared in TV commercial Garnier for dark spot remover and was the cover model for the brand. She has appeared in the TV ad for health services organization, Cigna. She serves as the spokesperson for Caress' Exotic Oil Infusions, a body wash. As of 2019, her net worth is estimated at around $20 million.