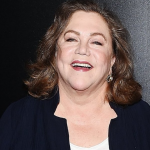 One of the American directors, film and stage actress is Mary Kathleen Turner who is famous as Kathleen Turner. She has won two Golden Globe Awards and has been nominated for an Academy Award. She is well known for her distinct husky voice.

What nationality is Kathleen Turner?

Kathleen Turner’s full name is Mary Kathleen Turner. She is born on 19 June 1954 at Springfield, Missouri. Her father's name is Allen Richard Turner who is a U.S. Foreign Service officer and his mother's name is Pasty Magee. She has two brothers and a sister named Susan. In a strict conservative Christian household, she was raised. Her interest was performing and it was encouraged by both her parents. She graduated from The American School in London in 1972. Their family moved to the United States after her father’s death. She began volunteering at a local Planned Parenthood office when she was 19. She attended Missouri State University. At the University of Maryland, she studied theatre and received a Bachelor of Fine Arts Degree.  She also acted in various productions.

How tall is Kathleen Turner?

Turner’s height is 1.73 m and her weight is 61 kg. Her eye color is blue and hair color is light brown. She has a balanced and healthy body.

She also published a book. In the book, she claimed that Nicolas Cage had been drunk and stole a Chihuahua that he liked. And then Cage filled a case against Turner. Cage argued and won the case which resulted in legal fees and a donation to charity. Later Turner apologized for the distress that she might have caused Cage regarding an incident that took place 20 years earlier during an interview on ‘The View’.

Turner was married to real estate Jay Weiss who is the entrepreneur. They had one child named Rachel Ann Weiss who was born on 14 October 1987. But they had the divorce in December 2007 officially.

What is Kathleen Turner's net worth?

Turner’s net worth is estimated to be $20 million dollars.