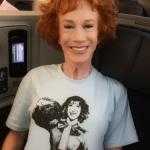 Kathy Griffin is a popular American comedian and actress. She has starred in several comedy specials for cable TV and has released six comedy albums to date. The 58-years old comedian rose to prominence after she appeared in a supporting role in the NBC sitcom Suddenly Susan from 1996 to 2000.

Her Bravo reality show, Kathy Griffin: My Life on the D-List won her two Primetime Emmy Awards for Outstanding Reality Program, Gracie Awards, and several more nominations. She earned 6 Grammy nominations and won one for her comedy album, Calm Down Gurrl in 2013.

She holds the Guinness World record for the number of aired TV specials on any network, by any comedian in the history of comedy, as she has recorded 16 television specials at Bravo.

Gossips and Rumors about Kathy Griffin

Kathy Griffin claimed via a series of Tweets that her salary was cut by Jeff Zucker for hosting the CNN New Year's Eve Event. CNN fired her last year from hosting CNN's annual New Year's Eve event after she drove controversy by posting an Instagram video of herself holding a fake severed, bloody head of U.S. President Donald Trump.

She wrote, "The first two years I appeared on CNN, it didn’t even occur to me to ask for a salary. In the 8th year when I asked Jeff Zucker for a raise, he was so angry he docked me 30%. I’m sorry to say I took the pay cut because I truly enjoyed making you all laugh."

What is Kathy Griffin Famous For?

Where is Kathy Griffin from?

Kathy Griffin was born on 4 November 1960. Her birth name is Kathleen Mary Griffin. She was born to John Patrick Griffin and Mary Margaret "Maggie" Griffin in the Chicago suburb of Oak Park, Illinois in the United States. She holds American nationality. She belongs to the white ethnicity.  Her horoscope is Scorpio. She has four siblings, Kenny, Joyce, Gary, and John. Her sister Joyce died in 2017 and her brother Gary died in 2014. Regarding her schooling, she attended St. Bernadine's Elementary School. She then attended Oak Park and River Forest High School. She then studied drama at Lee Strasberg Theatre and Film Institute in Los Angeles.

The Career Highlights of Kathy Griffin

Who is Kathy Griffin married to?

Kathy Griffin is a married woman. She has married marketing executive Randy Bick. The couple began dating in 2012 but parted ways in 2018. However, they reconciled in April 2019 and finally got married on January 1, 2020, at her home, in a ceremony officiated by comedian Lily Tomlin. She lives in Bel Air since 2016.

Previously, she was married to Matt Moline. They got married on 18 February 2001 at the 360 Degree Restaurant in Hollywood. The marriage ended and their divorce was finalized in May 2006. After their divorce, she was involved in romantic affairs with Steve Wozniak, Levi Johnston, Tom Vize, and Isaiah Mustafa. All of her affairs ended at some point.

What are Kathy Griffin's height and weight?

What is the Net Worth of Kathy Griffin?

As of today, the net worth of a 61-years-old comedian is estimated at around $40 million. She has earned her fortune by appearing on several television shows and films.

Trivias About Kathy Griffin You Need To Know.