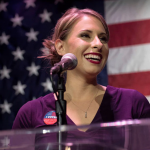 Katie Hill is an American politician and a member of the Democratic Party who currently serves as the US Representative for California's 25th congressional district. She is also a social services administrator and one of the LGBT members of the United States Congress. She was also the former executive director of People Assisting the Homeless(PATH). Hill denied allegations on her of being in a romantic relationship with Graham Kelly on October 22, 2019.

What is Katie Hill famous for?

When was Katie Hill born?

Katie Hill was born on August 25, 1987, in Abilene, Texas, United States. Her birth name is Katherine Lauren Hill. American is her nationality. Her ethnicity is White Caucasian while Virgo is her zodiac sign.

Katie Hill was born in a well-to-do family to Mike Hill(father) and Rachel Hill(mother). Her father is a police lieutenant while her mother is a local registered nurse. Hill was raised in the Saugus at Santa Clarita, California.

Hill studied at public schools, College of the canyons in the Santa Clarita Valley. Hill then graduated from California State University, Northridge with a Bachelor's degree in English and a Master of Public Administration. Hill had a keen interest in politics since her childhood that she choose politics as her future career.

Who is Katie Hill Married to? Is She Bisexual?

The politician Katie Hill is currently single. Hill was previously married to an artist Kenny Heslep. The couple got married on July 2010. Living together at Arua Dulce, California, for about 9 years, Heslep filled for divorce in 2019. Hill currently lives in an apartment in Washington D.C., with her fellow freshman representative, Lauren Underwood.

Katie Hill is a member of LGBT as she has openly claimed herself to be a bisexual after her high schooling. Hill is the first openly bisexual person from California to be elected to Congress Party.

What is the Net Worth of Katie Hill?

The 32 years old Katie Hill has quite a great earning through her professional career as US Representative for California's 25th congressional district. Hill must have her fortune in a thousand dollars with her post in the governmental sector. Her net worth isn't disclosed yet. Besides, her national profile grew quickly as a star fundraiser, raising over $8.3 million for her first House campaign.

How Tall is Katie Hill?

Katie Hill is a beautiful white lady. Hill has a fair complexion with blonde hair and brown eyes.