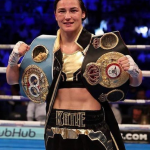 Katie Taylor is an Irish athlete who specializes in boxing. She is basically famous as a Boxer. She also was known as KT in public. Boxing and training with the Irish Amateur Boxing Association, she is the current Irish, European, World and Olympic Champion in the 60 kg division.

Katie Taylor is an Irish professional boxer and former footballer. She was born on 2 July 1986 in Bray, County Wicklow, Ireland. She was born to Bridget Taylor and Peter Taylor. She has three older siblings; Peter Taylor, Lee Taylor, and Sarah Taylor. She attended St. Kilian’s Community School in Bray from 1999 to 2005. She went on to University College Dublin but did not complete her studies as she left when her sporting career began to take off.

She began boxing in 1998. She first made Irish boxing history at the age of 15 from October 31, 2001, in the first officially sanctioned women’s bout ever held in Ireland. She fought 16-year-old Alanna Audley (now Alanna Murphy) of Belfast at the National Stadium in Dublin in the first of three female contests on a sixteen-bout amateur card. Taylor won over three 90-second rounds by 23-12.

Career, Salary and Net Worth

﻿2005: Taylor's first noteworthy success was at the 2005 European Amateur Championships, in Tønsberg, Norway. She won the gold medal, defeating Eva Wahlström of Finland in the final of the 60 kg lightweight class.

2005: Later in 2005, at the World Amateur Championships in Podolsk, Russia, Taylor advanced to the quarter-finals in the 60 kg weight class. Here she lost against Kang Kum-Hui, who remains the only boxer to have defeated Taylor at the World Championships.

2006: At the 2006 World Women's Boxing Championship, contested in New Delhi, India, Taylor became Ireland's first World Champion, defeating Chalaya again in the semi-final and then Erica Farias of Argentina in the 60 kg final.

2007: In 2007, she won her third successive European Championship title in Denmark.

2008: Taylor went on to claim her second World title at the 2008 AIBA Women's World Boxing Championship, contested in November at Ningbo, China. In the 60 kg weight class, she defeated China's Cheng Dong in the final match which was her 100th bout.

2009: Taylor won gold at the Russian Multi-Nations event at the Sports Palace in St Petersburg in July 2009 chalking up her 39th consecutive victory – and her 60th win in her last 61 bouts. She also went on to win her fourth successive European Championship title in September 2009 in Ukraine without conceding a point. She picked up another gold medal at the 2010 European Union Championships in Hungary

2009: Taylor defended her European Union title in 2009. She beat the home favorite, Bulgaria's Denitsa Elisayeva, in the July tournament hosted in Pazardzhik.

2010: On 18 September 2010, Taylor went on to claim her third successive World title at the 2010 AIBA Women's World Boxing Championship, in Barbados. In the 60 kg weight class, she again defeated China's Cheng Dong in the final match. This was Taylor's 100th career win.

2011: Taylor won the Gold Medal at the EU Women Boxing Championships in Katowice, Poland in 2011.

2012: On 19 May 2012, Taylor won her fourth successive World title at the 2012 AIBA Women's World Boxing Championship, in Qinhuangdao China. In the 60 kg weight class, she defeated Russian southpaw Sofya Ochigava.

Her career in boxing began at a young age where she was coached by her dad Peter Taylor who was also a professional boxer. Katie’s first official fight was at the age of 15 where she won against Belfast boxer Allana Audley. Her first Gold Medal was obtained in 2005 at the European Amateur Championships in Norway.

Over the next number of years, Katie went on to win numerous titles in Amateur Boxing. In 2012 Katie represented Ireland in the Olympic Games in London. She won the Gold Medal and became the first Olympic female lightweight champion.

She turned to professional boxing in 2016 and in 2017 she won her first professional world title. She has won all eight of her professional fights to date, four by knockouts and four by decision. Her next fight is set to be in New York on 28th April where she will face Argentines Victoria Bustos.

She played women’s football throughout her school days and at the age of 14 represented the under-17s Republic of Ireland women’s football team. In 2003 Katie scored four goals for the under-19s Republic of Ireland where she was just 15 years old. She went on to play in tournaments such as UEFA Women’s Championship and FIFA Women’s World Cup. Her final international appearance was at a qualifier for the 2011 FIFA Women’s World Cup which was held in 2009.

Her Net Worth and Salary hasn't revealed yet in public but the Irish government pays €40,000 ($50,000) per year to each of Ireland’s elite high-performance athletes.

She has a height of 5 5 ft 5 in (165 cm/1.65 m). Her weight around 60 kg. She has grown quite a large social media following over the years. Her Instagram account has over 100k followers while her Facebook has an impressive 150k followers. She also has over 135k followers on Twitter. Katie has her own website where fans can keep up to date with all her fight details and shop for KT Apparel.