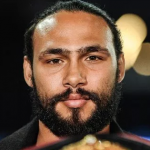 Keith Fitzgerald Thurman Jr. famed as Keith Thurman is an American professional boxer who is a former unified welterweight world champion. He is considered one of the hardest punchers in the welterweight division. He is well known by the ring name "One Time." He has held the WBA title From 2015 to 2019 (promoted to Super champion in 2017), and previously the WBC title from 2017 to 2018.

American boxer Keith Thurman faced defeat at the hands of Filipino legend Manny Pacquiao in a closely-contested bout in Las Vegas on Saturday night. Pacquiao became the oldest welterweight champion in boxing history with the split-decision victory over the WBA champion Thurman in front of a sell-out crowd of 14,356 at the MGM Grand Garden Arena. Two judges scored it 115-112 in favor of Pacquiao with the third scoring it 114-113 for Thurman. The first round made all the difference as Pacquiao floored Thurman with an electrifying combination and that helped the Filipino remain on the front foot throughout the pulsating 12-round duel. Although the bloodied Thurman rallied in the later rounds to narrow Pacquiao’s lead, the judges scored it in the Filipino’s favor. Official statistics showed Pacquiao landed 195 of 686 punches thrown, while Thurman connected with 210 of 571. “My numbers just weren’t up to par to be victorious tonight. The fight just flew by. I knew I had to do something big in the later rounds but he was just too good,” said Thurman.

Thurman was born on 23rd November 1988 as Keith Fitzgerald Thurman Jr. in the USA. But the exact details about his birthplace and parents are not in the media yet. He is an American native by nationality and his ethnicity is African-American. He was born under the star sign Sagittarius and his religion is Christian.

Keith is a very handsome person with athletic and strong body build. He has got a very charming smile attracting a lot of people towards him. He stands in the height of 5 ft 7 in (170 cm) and weighs around 147 lbs (66.82 kg). His other body measurements will be added soon. Overall, he has got a healthy body.

Keith is a married man. He is reportedly married to Nepalese wife, Priyana Thapa. Thurman met his wife Priyana at a nightclub in Tokyo, Japan in 2016 and dated for a year before tying the knot. Talking about their wedding ceremony, it was held in a traditional Nepalese way in the presence of their family. Besides, the flavor of the typical Nepali musical instrument was also added to their wedding. The couple seems to be satisfied with their marital status as there aren't any rumors of them getting separated in recent time. Despite being married for two years, the couple hasn't planned but babies yet. But they are planning for the baby. He regularly shares a picture of his wife, Priyana, in his social account, which suggests that he is in deep love with her. The couple is enjoying their life a lot without any sign of disturbances.

Net Worth of Keith Thurman

Keith is a very successful boxer and he holds a massive net worth over $5 million. However, his career earnings have not been disclosed yet, but he has earned an enormous fortune from his boxing career. Thurman who most recently fought with Manny Pacquiao earned $2.5 million as a guaranteed amount, irrespective to the result. However, ESPN stated that the two boxers are sure to gain more. It is estimated that Pacquiao received about more than $20 million while Thurman received about $8 million from the fight. He is spotted driving some of the luxurious cars of recent time, but apart from the pictures, he hasn't revealed any information about his cars. With the reference of his social media, we found that he is living a luxurious life from the money he has generated form his career. Moreover, he is often spotted spending his time along with his wife in some of the exotic places around the globe, spending extravagantly. Overall, he is satisfied with his earnings.