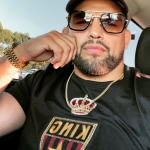 Kelvin Gastelum is an American professional mixed martial artist who is currently signed to the Ultimate Fighting Championship(UFC). Gastelum is the youngest fighter to win "The Ultimate Fighter 17" in 2012 at the age of 21. Recently, on August 19, 2019, he was ranked #4 in the UFC middleweight rankings.

What is Kelvin Gastelum Famous for?

Where is Kelvin Gastelum From?

Kelvin Gastelum was born on October 24, 1991, in San Jose, California, United States. His birth name is Kelvin Gastelum. His nationality is American. Gastelum belongs to Mexican-Amerian ethnicity while Scorpio is his zodiac sign.
Kelin was born to Mexican-hailing immigrants and was raised by a single mother, Patricia Encinas in Yuma, Arizona. His mother, Encinas raised him working around three to four jobs a day to meet the daily needs. Currently, his mother has her own restaurant "El Campeon" in Yuma.
Kelvin studied at Cibola High School where he was a State Championship Wrestler. Later, he joined North Idaho College but soon after then he decided to compete in MMA fight professionally. Kelvin even used to work as a bail bondsman to collect the fee for training at MMA full-time. He began his professional career at the age of 19.

Who is Kelvin Gastelum Married to?

The 28 years old MMA fighter, Kelvin Gastelum isn't married yet. He hasn't dated any girl yet as he has been more concerned about his career.

What is the Net Worth of Kelvin Gastelum?

Kelvin Gastelum has a great earning through his professional career as an MMA fighter. Gastelum has managed to amass a huge fortune of the amount in million dollars through his several matches, contract deals, and endorsement deals.
Gastelum enjoys his fortune which is currently estimated to be around $1.5 million.

How Tall is Kelvin Gastelum?