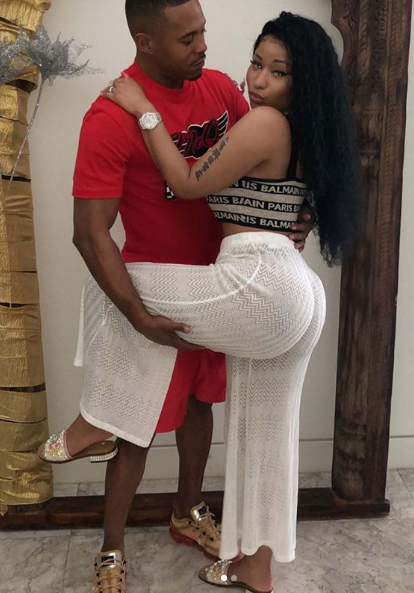 Kenneth got inked with Nicki Minaj's name on his Neck. Their relationship has advanced into the next step.

There's super exciting news for Nicki's fan. Those who have been following Nicki-Kenneth love story updates will be happy to hear that Kenneth has got inked with Nicki's name on his neck.

The 40-year old registered sex offender and convicted murder, Kenneth Petty's love for the rap queen, Nicki Minaj have grown much stronger and serious. Nicki, who revealed about their relationship couple of weeks ago, posted another video on her Instagram, sharing the tattoo of her name got by Kenneth. It can now be easily assumed that their relationship has gotten into the next step.

According to her Instagram video, Kenneth got a huge tattoo on his neck, written, ONIKA, the first name of Nicki Minaj. She captioned it, "Did ya tat hurt zaddy? his first tat-front like it didn't sting #Onika #HeavyOnit #SuperSleezy"

Nicki's caption poked Kenneth whether it hurt while getting inked.

Nicki seems super excited to disclose the tattoo. She is happy to let her fans know that both of them are feeling head over heels with each other.

The rap queen, Nicki, 36, previously revealed that Kenneth, 40, is serious about their relationship and he desperately wants her to be his better half. She revealed it with a couple-picture taken at her birthday celebration party in The Lodge by STK in New York City,  which was captioned, "He wants me to be his wife - his MISSIS like SIPPE NOW".

Kenneth's popularity grew after Nicki confirmed her romantic involvement with him a couple of weeks ago.