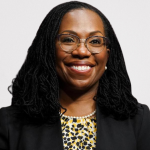 Ketanji Brown Jackson is an American attorney and Jurist. She is a member of the Judicial Conference Committee on Defender Services as well as Harvard University's Board of Overseers and the Council of the American Law Institute. Since 2021, she has been serving as a federal judge on the United States Court of Appeals for the District of Columbia Circuit.

On February 25, 2022, President Joe Biden announced that Jackson was his nominee for Associate Justice of the Supreme Court of the United States, filling the vacancy created upon Breyer's retirement. If she wins in the upcoming election, then she will be the first Black woman in the history of the US to serve the Supreme court.

What is Ketanji Brown Jackson famous for?

Where was Ketanji Brown Jackson born?

Ketanji Brown Jackson was born on 14th September 1970 in Washington, D.C., the U.S. Her parents named her Ketanji Onyika Brown at the time of her birth. She holds an American nationality and belongs to the Afro-American ethnicity. Her star sign is Virgo. She is a follower of Christianity.

Jackson was born into an upper-class- well-established black family. Her father Johnny Brown, was a lawyer while her mother Ellery Brown, served as school principal at New World School of the Arts in Downtown, Miami, Florida. She was raised by her parents in Miami, Florida where her parents were working.

Who are Ketanji Brown Jackson's parents?

Ketanji has been married to surgeon Patrick Graves Jackson since 1996. Patrick is a sixth-generation Harvard graduate, whose family is considered Boston Brahmin. Jackson is descended from delegate to the Continental Congress, Jonathan Jackson, and is related to Associate Justice of the Supreme Court of the United States, Oliver Wendell Holmes, Jr.

Ketanji met her future husband while they both were studying at Harvard University. At first, they were friends but time and their destiny brought them to become close with each other eventually falling in love with one another.  It is reported that  Patrick was Ketanji's first "serious boyfriend". As of now, the couple has become the parents of their two daughters: Talia and Leila.

How much is Ketanji Brown Jackson's net worth?

As of February 2022, the net worth of Ketanji Brown Jackson is estimated to be the US $2 million. She has accumulated her massive fortune through her career as a successful attorney. Currently, serving as a federal judge she earns $268,300​ per year plus allowances and government services are also given to her.

How tall is Ketanji Brown Jackson?

Ketanji Brown Jackson is around 5 ft 6 inches tall (Approx.) and her bodyweight is around 62 Kg. She has an apple-shaped body. She looks beautiful in her dreadlock hairstyle that is very shiny black. She has a pair of black-colored eyes. She regularly does exercises to keep herself fit and healthy.