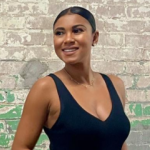 Eniko Hart is a Los Angeles-based American model and actress. She is popularly known as the second wife of Kevin Hart,  an American stand-up comedian, and actor. Kevin Hart is one of the 100 most influential people in the world and the wealthiest and most popular stand-up comedian. He made his breakthrough in Hollywood through the TV series "Undeclared" (2001).

Apart from modeling, Eniko has been established herself as a renowned public figure and social media star. As of February 2022, She has 3.3 million followers on her Instagram account @enikohart and 25.7k followers on Twitter. She has appeared in episodes of the TV series Entertainment Tonight and E! Live from the Red Carpet. She is an active supporter of her husband in his business field.

What is Eniko Hart famous for?

Where was Eniko Hart born?

Eniko Hart was born on 18th August 1984 in Baltimore, the most populous city in the U.S. state of Maryland. Her birth name is Eniko Parrish. She holds an American nationality and belongs to mixed ethnicity. Her star sign is Leo. She is a follower of Christianity.

Eniko Hart was born into a middle-class family. Hart's parents emigrated from Jamaica long before the model was born. Her father Kevin Parrish is a Jamaican who worked as a military vet while her mother Honey Andrea is of Asian (Chinese) heritage. She was raised by her parents with great love and care in her hometown Baltimore.

Reflecting on her education, Hart is a high school graduate. She also holds a bachelor's degree. However, she hasn't mentioned her high school and University.

What does Eniko Hart do?

Eniko Hart has been married to an American stand-up comedian and actor, Kevin Hart. Eniko and Kevin began dating in 2009 when Kevin was still in a marriage relationship with his ex-wife Torrei Hart. After his divorce from Torrei, the love birds officially confirmed their romantic relationship and began dating publicly.

On August 18, 2014, Hart proposed to Eniko Parrish. They married on August 13, 2016, near Santa Barbara, California. Their first child, a son whom they named Kenzo Kash Hart was born on November 21, 2017. Their second child together, a daughter named Kaori Mai Hart was born on September 29, 2020.

As of February 2022, the net worth of Eniko Hart is estimated to be the US $50 million. She has made these vast earnings through her modeling and acting career. As a top-rated model, she earns around $132,000 annually. Her major part of her income also comes from the promoted content and AdSense on her Instagram account.

Besides acting and modeling, Eniko has even ventured into several businesses. The vast majority of Eniko's net worth is also attributable to community property and earnings made by her husband Kevin Hart who is worth $200 million.

Eniko Hart is 5 ft 7 inches and her body weight is 58 Kg. She has an hourglass-shaped body. Her curvaceous body measures 35-27-35 inches. She is the lady with an ideal model type body and her body figure is the main subject of attraction for the people.

She wears a 40B(US) size bra and a 10 (US) size dress. She feels comfortable wearing 8(US) size shoes. She has a pair of Light brown-colored eyes. She looks elegant in her long silky hairstyle that is black in color. There are no reports to indicate that Eniko has had plastic surgery.