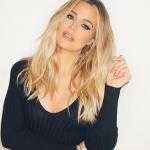 Khloe Alexandra Kardashian, popularly known by the name Khloe Kardashian is a popular American media personality, socialite, model, businesswoman, and entrepreneur. She became widely popular after she starred with her family in the reality television series, Keeping Up with the Kardashians since 2007. The popularity of the show led to the creation of its spin-offs, Kourtney and Khloe Take Miami and Kourtney and Khloe Take The Hamptons. She has also appeared in other television reality series. She also has business ventures with her sisters. 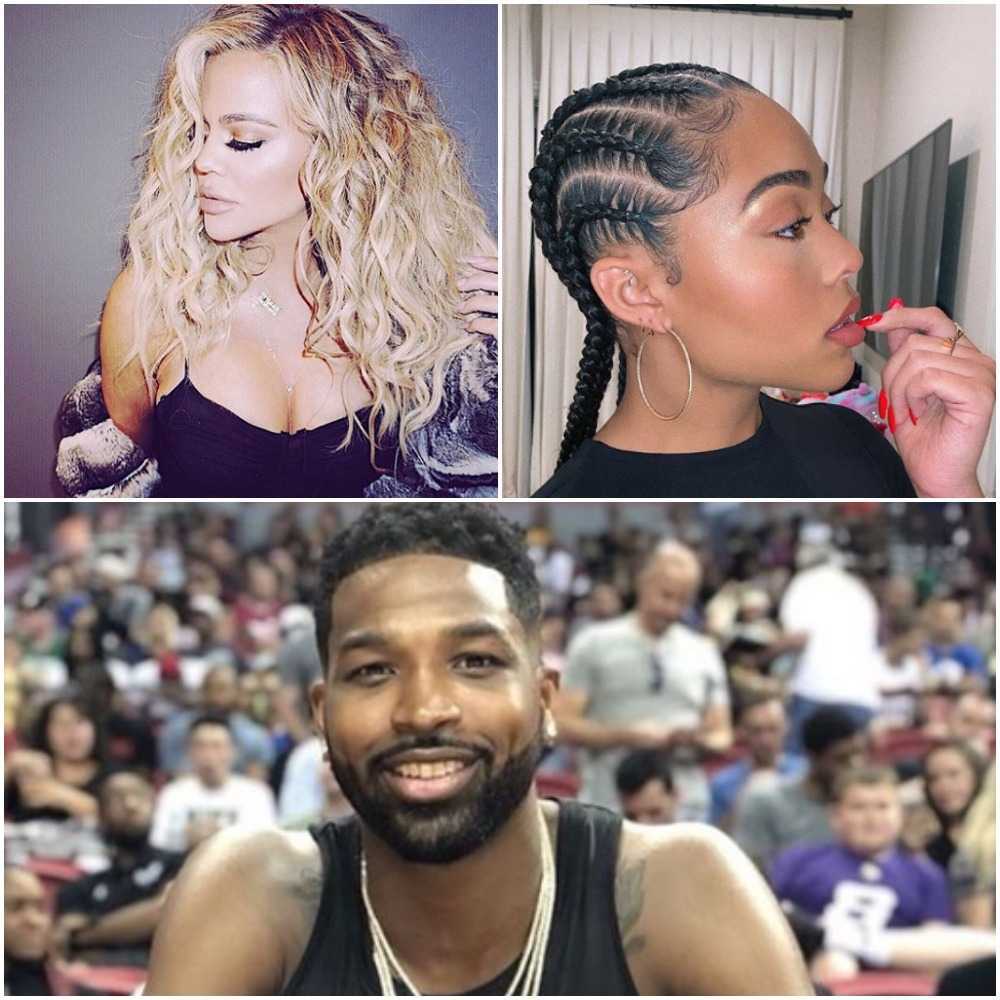 Khloe Kardashians went on to Twitter to lash out Jordyn Woods. She is best friends with Khloe's half-sister, Kylie Jenner and the same woman, Khloe's love, Tristan cheated her wife with.

The 21-years old model, Jordyn Woods appeared on Jada Pinkett Smith's Facebook Watch talk show, Red Table Talk, to confess her side of the story, where she told Tristan kissed her at a boozy house party but she swore that they didn't sleep together.

Tristan allegedly cheated on his wife, Khloe, when she was pregnant with his child.

Khloe went on to Twitter and replied Woods via a series of tweets.

She wrote, "Why are you lying jordynwoods ?? If you’re going to try and save yourself by going public, INSTEAD OF CALLING ME PRIVATELY TO APOLOGIZE FIRST, at least be HONEST about your story. BTW, You ARE the reason my family broke up!".

In another tweet, she wrote,  "Tristan is equally to blame but Tristan is the father of my child. Regardless of what he does to me, I won't do that to my daughter. He has been addressing this situation PRIVATELY. If Tristan were to lie publicly about what conspired, then yes I would address him publicly as well."

Khloe gave birth to their daughter, True Thompson in April 2018. The cheating scandal led to their separation in February 2019.

What is Khloe Kardashian known for?

Where did the Kardashians grow up?

Khloe Kardashian was born on 27 June 1984. Her birth name is Khloe Alexandra Kardashian. She was born to a father, Robert Kardashian, and a mother Kris (Houghton) Kardashian. Her mother is of Dutch, English, Irish, and Scottish ancestry, whereas her father was a third-generation Armenian American. Her birthplace is in Los Angeles, California in the United States. She holds American nationality. Her religion is Christian. Her zodiac sign is Cancer. Her parents divorced in 1991. Then, her mother married 1976 Summer Olympics decathlon winner, Caitlyn Jenner ( then Bruce) in 1991. She has 3 siblings, two older sisters, Kourtney and Kim, and a younger brother, Rob. After her mother's marriage with Caitlyn, she has two stepbrothers, Burton, and Brandon, a stepsister, Casey, and half-sisters, Kendall and Kylie.

She briefly attended a Roman Catholic all-girls' school, Marymount High School in Los Angeles. She left high school and enrolled in a home-based school after her sisters' graduation. She earned a GED with honors at the age of 17.

How old was Khloe Kardashian when the show started?

She was noticed following the sex tape scandal of her sister, Kim in 2007.

She then appeared with her family members in the reality television series, Keeping Up with the Kardashians in 2007.

The success of the reality television series garnered them wider popularity.

Their popularity led to the Kardashian receiving numerous endorsement deals.

The success of the reality series also led to the creations of spin-offs, Kourtney and Khloe Take Miami and Khloe & Lamar.

She and her sisters, Kim and Kourtney made cameo appearances in the Season 3 premiere of the series 90210.

She also appeared in Kourtney and Kim Take New York in 2011.

In April 2011, another show featuring Khloe and her then-husband, Lamar debuted.

She has business ventures with her sisters, Kourtney and Kim, in a clothing boutique in Calabasas, Miami and SoHo, D-A-S-H.

She and her sisters teamed up with the Natural Products Association to create a teeth whitening pen called Idol White in June 2009.

She has also appeared in one of PETA's "I'd Rather Go Naked Than Wear Fur" campaigns.

The three sisters released a jewelry line in March 2010.

They also released a clothing line for Bebe in the spring of 2010, which they later dropped in December same year.

They released another clothing line, K-Dash on QVC in September 2010.

She and her sisters marketed a fake tan product called Kardashian Glamour Tan, released in 2010.

The sisters released a book, Kardashian Konfidential in November 2010.

She and her then-husband released a unisex fragrance, "Unbreakable" in February 2011.

They released their first novel, "Dollhouse" in 2011.

She and Odom released a second unisex fragrance, "Unbreakable Joy" in October 2012.

Her radio show, The Mix Up With Khloe Kardashian Odom war aired in January 2012. It was a one-hour commercial free show, where she chats with her celebrity friends.

She was the co-hosts, along with Mario Lopez, of the American version of The X Factor in October 2012.

Keeping Up with the Kardashians spin-off series, Kourtney & Khloe Take the Hamptons was premiered in 2014.

She hosts the Kocktails with Khloe pop culture-themed variety talk show since January 2016.

She became the brand ambassador of Burst Oral Care in December 2018 and performed corn test on the electric toothbrush.

Who has Khloe Kardashian been married to? 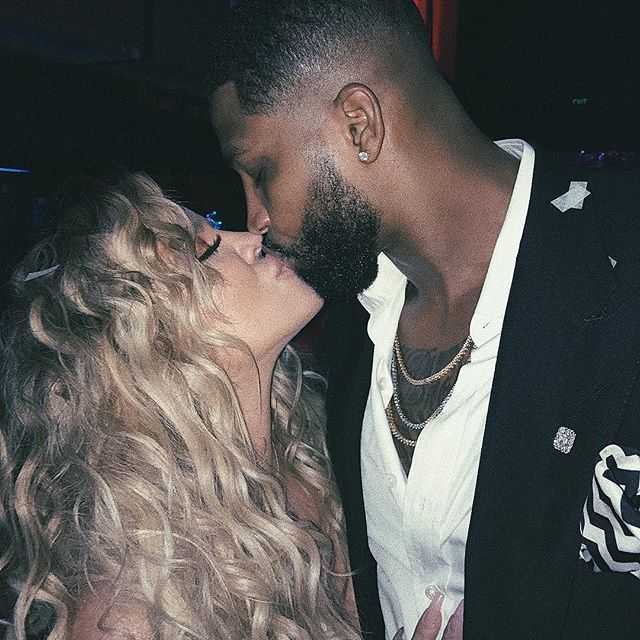 Khloe Kardashian was married before. She married professional basketball player, Lamar Odom. They met at a party for Odom's teammate Metta World Peace in August 2009. They tied a knot to each other a month later, on 27 September 2009. She removed her middle name and took her husband's surname becoming Khloe Kardashian Odom. She filed for divorce and for legal restoration of her last name in December 2013. Their divorce was finalized in December 2016.

She then dated basketball player Tristan Thompson. She announced in December 2017 that they were expecting their first child. She gave birth to a daughter, True Thompson in April 2018. Thompson drew controversy after it was found out that Thompson cheated on her during her pregnancy. It was revealed that Thompson had allegedly cheated on her with her younger half-sister Kylie Jenner's best friend Jordyn Woods. They later split in February 2019.

Earlier in 2001, she suffered a traumatic brain injury in a car accident that caused a long-term memory loss.

She supports the recognition of the American Genocide. And she has visited the memorial to the victims in Yerevan, Armenia, named Tsitsernakaberd.

She was arrested for driving under influence on 4 March 2007. She reported to the jail to serve time for violation of probation on 18 July 2008. She faced a sentence of up to 30 days and enrollment in an alcohol treatment program within three weeks of her release from jail. However, she was released less than three hours later due to overcrowding.

She was sued by a woman in December 2011 who claimed she and 10 other people assaulted her outside a nightclub earlier in December 2009.

She and her sisters, Kourtney and Kim were named in a $5 million class-action lawsuit against QuickTrim in March 2012. The complaint accused the Kardashians of false and deceptive marketing of the diet aid.

Who is Tristan Thompson?

How Much Is Khloe Kardashian worth?

As her popularity grew widely after she starred in the television reality series, Keeping Up with the Kardashians, she has endorsed popular brands. She has endorsed Coca-Cola, Sears, QuickTrim, Nail Polish, among others. Her popularity has also helped to establish herself in the business. She has launched clothing lines, fragrances and was also a brand ambassador of Burst Oral Care. Her main source of income comes from business, endorsements, and appearing in the television shows. As of 2019, her net worth is estimated at $40 million.