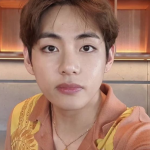 Kim Tae-Hyung is a versatile South Korean singer, songwriter, and actor who is also known by his stage name V.  He is famous for his vocals in the popular Bangtan Boys, or BTS, music group. His band's hit singles include "Blood Sweat & Tears" and "Not Today." He has also appeared in the Korean drama "Hwarang: The Poet Warrior Youth". Kim joined BTS in 2011, but he wasn't revealed to be a member of the group until 2013 whereas he and BTS became the first Kpop group to clinch a Billboard award in 2017. On 12th June 2013, Tae-Hyung, as one of the members of BTS, released their debut album "2 Cool 4 Skool" under the label Loen Entertainment and Big Hit Entertainment. Kim made his first television show appearance on the talk show, "After School Club" appearing as a guest. Moreover, he was appointed Special Presidential Envoy for Future Generations and Culture by South Korean President Moon Jae-in in July 2021. Kim Taehyung is known for being a South Korean singer, songwriter, actor, and vocalist of the South Korean boy group BTS.

Kim Tae-Hyung opened his eyes for the very first time on 30th December 1995 in Seo District, Daegu, South Korea. However, he grew up in Geochang County. He holds South Korean nationality and belongs to Asian ethnicity. Similarly, his religion is Christian and his race is white. Kim's present age is 25 and he will be celebrating his 26th birthday in the coming December of 2021. As per his birthdate, his zodiac sign is Capricorn. His father, Mr. Taehyung works farmer to provide financial needs for their breed and his mother Mrs. Taehyung is a housewife. He is the eldest of three children, with a younger brother and sister.

Regarding Kim's education, he graduated from Korean Arts High School in 2014 and enrolled in Global Cyber University from where he graduated in August 2020 with a major in Broadcasting and Entertainment. As of 2021, he is enrolled at Hanyang Cyber University, pursuing a Master of Business Administration in Advertising and Media.

How Kim Taehyung started his career?

Kim Tae-Hyung is an unmarried guy. There have been many rumors sparked on his relationship status. There was a time when fans believed that he was dating a BTS fan named Hi. When the rumors seemed to have been blown out of proportion, the Big Hit stepped in and stated that Tae-Hyung and Hi were in contact, but there was nothing romantic brewing between the two. They also claimed that V and Hi are just good friends. So as of now, Kim is single and can not be dating anyone so far. Concerning his sexual orientation, he is straight.

Kim Tae-Hyung has a net worth of $10 million as of 2021. He has also a fine amount of salary which is also in thousands of dollars per year. He has gained most of this money by being one of the most successful singers in the whole Korean music industry. It is all his hard work for his passion that has resulted in him being so successful. He has featured in the TV commercials for the following brands like BBQ Coconut Chicken, Gucci, Puma, Korean ASMR Crispy Fried Chicken, and many others from where he gains a considerable amount of money. In addition, his major source of income is from his singer, songwriter, and actor career.

Kim Tae-Hyung is a handsome singer who is 5 ft 10½ in or 179 cm tall and his body weighs around 70 kg or 154 lbs. His cute face with soft facial features and tapering jawline has attracted a lot of people towards him. He has good-looking blonde hair and dark brown eys color. Furthermore, Kim has an average body build with 38-28-35 inches of body measurement.