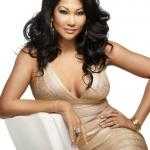 Kimora Lee Leissner, formerly Simmons, popularly known as Kimora Lee Simmons is an American fashion model and fashion designer. She took over Baby Phat and became CEO/creative director through 2010. She is known for her own reality television shows, Kimora: Life in the Fab Lane, and Kimora: House of Fab. She has over 1.8 million followers on her Instagram.

Kimora Lee was born on 4 May 1975. Her birth name is Kimora Lee Perkins. She was born to a father, Vernon Whitlock Jr., and a mother, Joanne "Kyoko" Perkins. Her birthplace is in St. Louis, Missouri in the United States. She holds American nationality. Her zodiac sign is Taurus. She grew up in northern St.Louis suburb of Florissant, Missouri.

Her mother was born in Korea to a Japenese mother and was adopted by a U.S serviceman during the Korean War. She was raised in the U.S. Her father worked as a Federal Marshal, and Equal Employment Opportunity Commission investigator, a bail bondsman, and later became a barber in St. Louis. He was sentenced to a 24-year prison for distribution of narcotics. The government agents tried to recruit her father as an informant but her father refused and served 5 years in prison. Her parents divorced and she was raised by her mother.

She attended Lutheran North High School in St. Louis, Missouri. She faced bullying because of her height and mixed ancestry. She was 5 feet and 10 inches tall by the age of 10. Her mother enrolled her in a modeling class to build up her confidence when she was eleven years old.

A representative for seminal Paris Agency Glamour, Marie-Christine Kollock discovered Kimora at a Model Search in Kansas City and sent her to Paris.

Kimora signed an exclusive modeling contract with Chanel. She had just celebrated her 14th birthday then.

She went to work under the tutelage of Chanel designer Karl Lagerfeld.

She earned attention in the fashion world very quickly after she closed Lagerfeld's haute couture show in 1989.

She then walked for other popular designers including Fendi, Valentino, Emanuel Ungaro, and Yves Saint Laurent.

She has been featured on the cover of the German, Indonesian, Singaporean, and Malaysian editions of Harper's Bazaar.

Kimora parted her ways with Baby Phat and its management company, Kellwood in September 2010.

The reason for her removal from the firm has not been clear. It is reported by some blogs that she was spending too much money on company pursuits and giving too much pay to herself and her children.

Kimora planned to launch her KLS collection and Kouture by Kimora Brands.

She announced in September 2011 that she has become the new creative director and president of the personalized shopping website, JustFab.

She parted ways with JustFab in May 2015.

She relaunched her KLS label as a high-end line in June 2015. She opened its first boutique in Beverly Hills.

The line began being carried at Bloomingdale's in the Aventura Mall in 2016.

She has appeared in small roles in several films and television.

She has appeared in films, For Love or Money, The Big Tease, Brown Sugar, Beauty Shop, Rebound, and Waist Deep.

She has appeared in music videos "Tapout", "Change Clothes", and "In Those Jeans".

She has been a co-host of Sony Television's syndicated talk show, Life & Style.

She then appeared in her own reality show, Kimora: Life in the Fab Lane between 2007 and 2011.

She later appeared in her own reality show, Kimora: House of Fab in 2013.

She wrote a self-help book, Fabulosity: What It Is and How to Get It and was published in February 2016. The book is about a lifestyle manual on everything from spiritually and finances to fashion and beauty.

She has launched 5 perfumes for women: Goddess, Golden Goddess, Seductive Goddess, Baby Phat Fabulosity, Love Me, and Dare Me.

She sponsored KLS Rushcard which included her own line of purple Rushcards.

Who is Kimora Lee married to?

Kimora Lee first married Russell Simmons. They first met during 1992 New York City's Fashion Week when Kimora was 17. On 20 December 1998, they got married to each other. The couple shares 2 daughters together, Ming Lee Simmons, and Aoki Lee Simmons. The couple separated in March 2006 and their divorce was later finalized in January 2009.

She then started dating actor and model, Djimon Hounsou in March 2007. The couple participated in a traditional Benin commitment ceremony in the summer of 2008. The couple shares a son together, Kenzo Lee Hounsou. They later separated in November 2012. They were never legally married in the United States.

Kimora Lee then married former Goldman Sachs banker Tim Leissner. She confirmed that they had been married for a while in February 2014. The couple shares a son together, Wolfe Lee Leissner.

She lives with her family in Beverly Hills, California.

She was arrested and charged with reckless driving, eluding police, driving with broken brake light, and marijuana possession in July 2004. She was arrested after a two-mile chase that began near the Saddle River Police Station and ended outside her estate in Saddle River, New Jersey. She was placed on six months probation after she pleaded guilty to the reckless driving charge.

What Are Kimora Lee's Body Measurements?

How much is Kimora Lee Worth?

Kimora is one of the established model and fashion businesswoman. She started her career as a model and later entered into business in the fashion industry. She has modeled promoted several brands as a model. Later, she has launched several of her own clothing lines and perfumes. Besides modeling and business, she has also appeared in films and tv shows. Working in the entertainment industry is her major source of income. As of 2019, her net worth is estimated at $50 million.