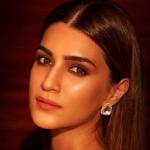 Kriti Sanon is an Indian actress. She made her acting debut with the Telugu film, 1: Nenokkadine in 2014. She made her breakthrough with her debut Hindi film, Heropanti. For which, she won the Filmfare Award for Best Female Debut. Since then, she has starred in numerous movies in Bollywood. She has been established as one of the most commercially successful artists.

What is Kriti Sanon Famous For?

Where is Kriti Sanon From?

Kriti Sanon was born on 27 July 1990. She was born in New Delhi in India. She holds Indian nationality. Her parents are Rahul Sanon and Geeta Sanon. Her father is a chartered accountant and her mother is a physics professor at the University of Delhi. Her family is Punjabi. She belongs to the South Asian ethnicity and her religion is Hindu. She has a sister named Nupur. Her zodiac sign is Leo.

Regarding her educational background, she attended Delhi Public School. After high school, she attended Jaypee Institute of Information Technology. She graduated with a Bachelor of Technology degree in Electronics and Telecommunication Engineering.

Who is Kriti Sanon Boyfriend?

Kriti Sanon is not married. She is reportedly single at present. She has been romantically linked to the actor, Kartik Aaryan. However, there is no official information about her relationship. She was previously rumored to be dating Sushant Singh Rajput. They had worked together in the 2017 film, Raabta.

She lives in Mumbai, Maharashtra.

What is Kriti Sanon Height?

What is Kriti Sanon Net Worth?