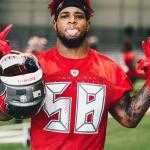 Kwon Alexander is an American football player for the San Francisco 49ers of the National Football League (NFL). He plays in the linebacker position. He joined the 49ers in March 2019. Previously, Tampa Bay Buccaneers selected him in the fourth round with the 124th overall pick of the 2015 NFL Draft. He played high school football at Oxford High School and college football at Louisiana State University.

He has over 131k followers on his Instagram. He has recorded 380 total tackles, 7 sacks, 6 forced fumbles, 2 fumble recoveries, 6 interceptions, and 1 defensive touchdown in his NFL career till date.

San Franciso 49ers signed a linebacker, Kwon Alexander. The linebacker from Alabama previously played for Tampa Bay Buccaneers when he was selected by the 49ers in the 2015 NFL draft. San Francisco signed a four-year deal with the 24-years old linebacker worth $54 million plus $27 million guaranteed.

The deal signed between the linebacker and the 49ers made Kwon the highest-paid inside linebacker in the league.

In his NFL career till date, the 24-years linebacker has already recorded 380 total tackles in his NFL career playing from the Tampa Bay Buccaneers before. He missed the majority of the 2018 NFL season due to an ACL injury and now will play for the 49ers this season.

Why si Kwon Alexander famous for?

Kwon Alexander was born on 3 August 1994. He was born to parents, Broderick Taylor and Peaches Taylor. His birthplace is in Oxford, Alabama in the United States. His nationality is American. He had a brother Broderick Taylor Jr who was murdered in 2015.

He attended Oxford High School in Oxford, Alabama. In his junior season at Oxford, he recorded 144 tackles, 17 sacks, and 6 forced fumbles. However, he missed most of his 2011 senior year at Oxford due to the knee injury. He participated in the Under Armour All-American Game as a member of the black team.  He was one of the finalists for the High School Butkus Award and was named to the 2011 ESPN All-Alabama Football Team. He was also a Class 6A All-State Football Team Honorable Mention.

Kwon Alexander completed all the necessary drills at the NFL Scouting Combine in Indianapolis, Indiana and finished second among all linebackers in the 40-yard dash, sixth in the bench press and short shuttle, and ninth in the three-cone drill.

He was projected to be a third-round pick by NFL drafts experts and scouts.

The Tampa Bay Buccaneers selected him in the fourth round with the 124th overall pick of the 2015 NFL Draft.

The Buccaneers signed a four-year deal with him worth $2.75 million that included a signing bonus of $478,322.

He was named starting middle linebacker alongside linebackers Lavonte David and David Lansanah.

Kwon made his professional debut as well as his career start against the Tennessee Titans.

He faced a four-game ban on 7 December 2015 for violating the league's policy on performance-enhancing substances.

He recorded 93 combined tackles, 9 pass deflections, 3 sacks, and 2 interceptions in 12 games and 12 starts in his rookie season with the Buccaneers.

In his second season with the Buccaneers, he was once again named the starting middle linebacker to begin the regular season under the new head coach Dirk Koetter.

At the end of his second season with the Buccaneers, he recorded 145 total tackles, 7 pass deflections, 3 sacks, and 1 interception in 16 games and 16 starts.

He was named the most improved second-year linebackers at the end of 2016 season.

He sustained hamstring injury during the early 2017 season that kept him out for 4 games.

He completed the 2017 season with the Buccaneers recording 97 total tackles, 4 pass deflections, and 3 interceptions in 12 games and 12 starts.

He was named to his first Pro Bowl replacing injured Bobby Wagner, middle linebacker for the Seahawks.

He played only the first six games of the 2018 NFL season before suffering an ACL injury during the Week 7 match. The injury sidelined him out of the field for the rest of the season.

What are Kwon Alexander's Career Highlights?

Who is Kwon Alexander Dating?

The 49ers linebacker, Kwon Alexander is unmarried. He is young and not ready to start a family. He is more focused on his NFL career. No rumors about his romantic affairs have surfaced yet. However, he might or might not be dating someone. He has managed to maintain his personal life private.

What are Kwon Alexander's Body Measurements?

What is Kwon Alexander's Net Worth?

Kwon Alexander, a linebacker from Alabama joined San Francisco 49ers on a four-year deal on 11 March 2019 worth $54 million including $27 million guaranteed. Previously, he was drafted by Tampa Bay Buccaneers signing a four-year deal with the Buccaneers worth $2.75 million including a signing bonus of $478,322. As of 2019, his net worth is under evaluation. It will be updated soon.