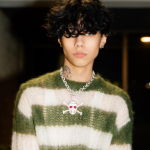 Landon Asher Barker is an American reality TV personality, singer, and social media influencer who is best known for being the son of the American musician, Travis Barker and the American model and actress, Shanna Moakler. Landon made his first television appearance at the age of two, in 2005, on his family's reality show "Meet the Barkers alongside his parents. The show aired on MTV until 2006. He has released several singles including "Don't need her", "Holiday", "Trust", and "I am Sorry" under the name OTG Landon.

Besides, he is also active on the social media platform with around 914k followers on his verified Instagram account: @landonasherbarker. He also has a Youtube channel titled as himself "London Barker" which has around 130k subscribers.

What is Travis Barker's son famous for?

Who are Landon Asher Barker's parents?

Landon Asher Barker was born on October 9, 2003, in Santa Monica, California, United States. His birth name is Landon Asher Barker. He holds an American nationality. His ethnicity is White while Libra is his zodiac sign. He is Christain by religion.

Landon was born as the son of Travis Landon Barker(father) and Shanna Lynn Moakler(mother). His father is an American musician who is mostly known for being the drummer for the rock band Blink-182 while his mother is an American model, actress, and reality television star who is known for being the winner of the Miss New York USA pageant in 1995 and the first runner-up at Miss USA 1995.

He has a younger sister named, Alabama Luella. He also has an elder step-sister, Atiana Cecilia De La Hoya from his mother's relationship with her ex-fiancé, boxer Oscar De La Hoya. His parents had an on-again, off-again romance before divorcing in 2008. They did, however, raise the children together for some time.

Landon was raised Catholic in his hometown, Santa Monica, California alongside his sisters. Born in a family with a music background, he developed an interest in singing from a young age and also took several music classes and also performed in school programs. He later attended Fontana High School.

Who is Landon Asher Barker dating?

Landon Asher Barker is currently single. He has not revealed much about his personal life. The rising singer seems to be much more focused on his career than his personal life. Previously, in 2016, he was in a relationship with the social media personality, Devenity Perkins. However, within a few months, the couple got separated. Landon was also rumored to be dating actress, Natalia Muriithi. But neither of them confirmed their relationship. He currently lives with his mother and sisters in their home in California. He is also fond of playing basketball. He is a dog lover and also owns a pet dog.

How much is Landon Asher Barker's worth?

Landon Asher Barker has earned a handsome sum of money from his profession as a reality TV personality and singer. Having made his television debut at the very young age of 2, Landon has come a long way becoming one of the rising singers at the age of 18. His income is surely from his singles and musical concerts. He also makes additional income from his Youtube channel. Including all of his earnings, Landon has an estimated net worth of $500k while his father has a whooping net worth of $80 million.

How tall is Landon Asher Barker?

Landon Asher Barker is a handsome man with a well-maintained athletic body physique in his late teens. He has a fair complexion with brown eyes and a pair of brown eyes.  He stands tall with a height of 5ft 9 inches( 1.79m) and has a bodyweight of 56kg( 123 lbs). He has tattoos on his hands, arms, and neck.

Trivias About Landon Barker You Need To Know.