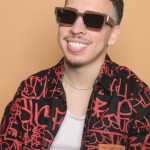 Landon McBroom is an American social media sensation who starred alongside his ex-girlfriend Shyla Walker on the popular YouTube channel "THIS IS L&S". He and Shyla created their YouTube channel in June of 2017. Their Youtube has gained more than 3.05M subscribers. He is also well known as the brother of Austin McBroom, who runs the YouTube channel "The ACE Family". A skilled athlete like his brother, he is also a certified trainer. Apart from YouTube, Landon has a huge growing social media followers particularly on Instagram, which has already garnered more than 1m followers. He also has a Twitter account where he has gained over 95.1K followers.

Landon McBroom was born on 26th September 1996 in Los Angeles, California, the U.S. He holds American nationality and belongs to American-white ethnic background. His religious belief is in the Christian religion. Landon has celebrated his 24th birthday as of 2020 and he will be celebrating his 25th birthday in the September of 2021. As per his birthdate, his star sign is Libra. Thus, his race is white. He is the son of his father, Allen McBroom, and his mother, Michole McBroom. He has one sibling a brother named Austin McBroom.

Landon McBroom is an unmarried guy. He was in a romantic relationship with his long-term girlfriend Shyla Walker with whom he was blessed with a daughter named Souline in December 2019. The pair's relationship was outstanding however, McBroom and Shyla announced that they were ending their channel and wouldn't making any new videos in May 2021. Not long later, it became clear that their five-year relationship was in serious trouble. Reflecting Landon's sexual orientation, he is straight.

Landon McBroom Break up: Who is his long-term Girlfriend?

What happened to Landon McBroom?

Landon McBroom and Shyla have taken their fight online in the months since they stopped posting videos. First, TMZ reported that Shyla had filed for a restraining order against Landon, claiming that he had physically abused her. In documents obtained by the outlet, Shyla claimed that Landon had pushed her during an argument and that he had tried to kidnap their daughter Souline. The restraining order was granted, and Landon was asked to stay at least 100 yards away from both Shyla and Souline. Although that could have been the end of it, the drama between the two has continued to play out on Instagram. Just recently, Landon posted that he had finally been allowed to see his daughter. "The longest three months of our lives," he wrote in the caption. "Today was a victory."

Shyla was apparently not thrilled that Landon had decided to post about their daughter online. In response, she posted accusations against him on her Instagram Stories. "I've been beaten, I've been abused, I've had three attempted kidnappings on my child," she wrote. "If you love someone you do not put yourself in the position to lose them. I will always do what's best for my child every single f--king time." "I requested visitation," she continued. "I want my daughter to have a relationship with her father with whom she will always love regardless of the circumstances. Children grow up and will eventually see the truth on their own without me saying one word. All I asked was for her privacy to be respected during this time and not extort her for clout and/ or monetary gains."

Landon McBroom worth: What does he do?

Landon McBroom is a versatile guy who has a net worth of around $700,000 as of 2021. He also earns a considerable amount of salary which ranges from $26.5K to $424K. In his short professional time also, he has established himself an identity already. Like many young adults of today's, he's also superbly ambitious and continues to work even harder to reach his set objectives. Landon's major source of income is from his social media personality career.

Landon McBroom is 5 ft 8 in or 173 cm tall and his body weighs around 68 kg or 150 lbs. His physique combined with his perfect height and masculine look takes him to the top of the desired list in the young gen women. He has inked attractive tattoos on his arms, back, and shoulder. McBroom has good-looking short black hair and dark brown eyes color. He has an athletic body build with 39-34-16 inches of body measurement. Furthermore, McBroom also has lymphoma, which is a form of cancer.

Trivias About Landon McBroom You Need To Know.