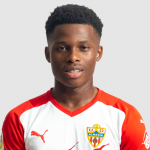 Largie Ramazani is a versatile Belgian professional footballer who comes to light playing for the Spanish club Almeria. His jersey number is 7. He can also play as a forward although he is a winger capable of playing on both flanks. He made his senior debut for United on 28th November 2019, coming on as a late substitute for James Garner in a 2-1 UEFA Europa League away loss against FC Astana. Largie also represented the latter at under-17, under-18, and under-19 levels. Recently on 14th August 2022, he scored his first La Liga goal for Almeria after promotion, in a 2-1 defeat against Real Madrid. He is also active in social media as he has earned more than 49.9K followers on his Instagram account.

What is Largie Ramazani Famous For?

What Nationality is Largie Ramazani?

Largie Ramazani stepped for the very first time into the world on 27th February 2001 in Sint-Agatha-Berchem, Belgium. He is of Belgian nationality and belongs to mixed ethnicity. Likewise, his religion is Christian and his race is black. Largie's present age is 21 which he celebrated in 2022 and as per his birthdate, his zodiac sign is Pisces. He has not shared any details regarding his parents however we know that he has an older brother named Diamant who is also a footballer.

Largie Ramazani began his football career by joining Charlton Athletic's youth setup at the age of 12 after failed trials at Fulham and Chelsea. He signed a four-year deal with Manchester United on 3rd July 2017 at the age of 16.

Is Largie Ramazani Dating Anyone?

Largie Ramazani is in a romantic relationship with a beautiful lady whose details have not been revealed yet. As he has not however spoken very daringly and openly about his relationship, he definitely shows his affection whenever the two are together. Largie has also shared a beautiful picture with his partner on his Instagram account. Reflecting on his sexual orientation, he is straight.

How much is Largie Ramazani Net Worth?

Largie Ramazani has established himself an identity already in his short professional time. He has a net worth of between $1 million to $5 million as of 2022 whereas he also earns a fine amount salary which is around a thousand dollars per year. Like many young adults of today, he's also superbly ambitious and continues to work even harder to reach his set objectives. Largie's current market value is $4.40m which is also his highest market value as of 29th June 2022. In addition, his major source of income is his football career.

What is the Height of Largie Ramazani?

Largie Ramazani stands at an ideal height of 1.67 m (5 ft 6 in) with 68 kg of body weight.  He's got unconventional attractive looks and raw appeal about him. Largie has good-looking black hair and dark brown eyes color. Moreover, his body build type is athletic. He has kept his body fit and healthy as a professional footballer.