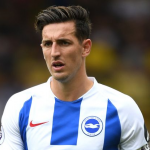 Lewis Carl Dunk is an English professional football player who plays for Premier League club Brighton & Hove Albion, which he captains, and the England national team as a center-back. Aside from a brief loan spell at Bristol City in 2013, he has spent the entirety of his career at his hometown club Brighton & Hove Albion, making over 350 appearances for the club and scoring over 20 goals in all the competitions. During his 2016-17 season, he achieved promotion to the Premier League with Brighton and was named in the Championship team of the year. He became the club's captain from the 2019-20 season.

On the international level, despite never being capped at youth level, he was called up to the England U21 side in 2011. He made his senior international debut for England on 15 November 2018 which remains his only cap to date.

Where is Lewis Dunk from?

Lewis Dunk was born on 21 November 1991. His birthplace is Brighton, England. His birth name is Lewis Carl Dunk. He holds English nationality and he belongs to the white ethnicity. Likewise, his religion is Christianity and as per his birth date, his zodiac sign is Scorpio. His father’s name is Mark Dunk, and his mother’s name is not yet revealed. His father, Mark Dunk was a former Sussex non-league player. He was educated at Varndean School.

Who does Lewis Dunk for?

How much does Lewis Dunk earn?

He is a very successful footballer and his major source of earning is from his football career. The net worth of Lewis Dunk as of 2022 is believed to be around €14 million where he received £3.4 million as a yearly salary from his current club. His income is from contracts, salaries, bonuses, and endorsements. His market value is around €22 million. With these massive earnings, he is living a luxurious lifestyle.

Who is Lewis Dunk's wife?

Looking at his personal life, he is not married. He is in a long-term relationship with Abi Yaxley who has been together since 2013. Despite dating for so long they are still not married. They got engaged in the summer of 2019. He shared the news through his social media post. Although they do not show much presence on social media, they are very close to each other. The couple is blessed with two children. He has an intimate relationship with his wife and children where they are living their life happily together.

How tall is Lewis Dunk?

Lewis Dunk stands at a height of 1.92m i.e. 6 feet and 4 inches tall. He has a bodyweight of 88kg. Moreover, he has an athletic body build. His eye color is dark brown and his hair color is black. His sexual orientation is straight. His other body measurement such as chest size, biceps size, and waist size is still got to get revealed yet. Overall, he has got a healthy body.

Trivias About Lewis Dunk You Need To Know.