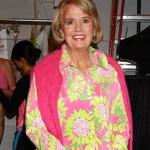 Lilly Pulitzer was an American entrepreneur, fashion designer, and American socialite who was well known as the founder of Lilly Pulitzer, Inc. She became popular more for creating bright floral print clothes for high society. With her creation of bright, colorful, and floral prints, Lillian was often called the "Queen of Prep".

Lilly attended Chapin School along with Jacqueline Kennedy, First Lady of the United States. However, Lilly passed away at the age of 81 on April 7, 2013.

What was Lilly Pulitzer Famous for?

Where was Lilly Pulitzer Born?

Lilly Pulitzer was born on November 10, 1931, in Roslyn, New York, United States. Her birth name was Lillian Lee McKim. Her nationality was American. Pulitzer belonged to White ethnicity while Scorpio was her zodiac sign.

Lilly was born in a well-to-do family as the second daughter of her parents: Robert V. McKim(father) and his wife, Lillian Stokes Bostwick Phips(mother). Both of her parents were popular socialites at the time. Her mother, Lillian was an heiress to the Standard Oil fortune. However, her parents divorced and her mother, Lillian got remarried to Ogden Phipps, an American stockbroker and court tennis champion who was also inducted into the International Court Hall of Fame in 2001.

Lilly grew up in a rich high-class society along with her 2 sisters: an elder sister, Mary Maude, and younger sister, Florence Fitch. She attended the Chapin School in New York City, where she was a classmate of Jacqueline Lee Bouvier(the future Jacqueline Kennedy, First Lady of the United States).

She graduated from Miss Porter's School in Farmington, Connecticut, in 1949. She also had joined the college-finishing school Finch College in New York City, but she left after one semester to work as a midwife assistant with Frontier Nursing Service in Kentucky. Alongside, she also worked as a volunteer at the Veterans Hospital in The Bronx.

When Did Lilly Pultizer Die?

Lilly Pultizer died on April 7, 2013, at her home in Palm Beach, Florida at the age of 81. Her cause of death was a natural cause. She is survived by her 3 children from her first marriage to Peter Pulitzer and grandchildren.

Who was Lilly Pulitzer Married to?

Lilly Pulitzer was married twice throughout her life till her death in 2013. Pulitzer's first marriage was with Herbert "Peter" Pulitzer. Herbert was also from a well-known family as he was the grandson of Joseph Pulitzer, a popular newspaper publisher after whom the Pulitzer Prize is named.

The couple got married at a grand wedding in 1950 and were blessed with 3 children: a son, Peter, and 2 daughters, Minnie and Liza. However, after 19 years of marriage, their marriage came to an end with a divorce.

Lilly shortly after her divorce got married to Enrique Rousseau the same year in 1969. However, Rousseau died of cancer in 1993, and Lilly never got married again. Although she legally changed her name to Lillian McKim Rousseau, her clothing company continued to operate under the "Lilly Pulitzer" label.

What was the Net Worth of Lilly Pulitzer?

Lilly Pulitzer had quite great earnings from her professional career as a designer and founder of her popular company, "Lilly Pulitzer, Inc." Having been in the field of designing and art for years, Lilly had undoubtedly managed to amass a heavy fortune from her several creative designs that were worn by the high-class people in the 1950s till the 1980s.

Her net worth was estimated to be around $100 million at the time of her death.

How Tall was Lilly Pulitzer?

Lilly Pulitzer was a beautiful lady in her 80s at the time of her death. With her charming personality, way of living, and her smile, Lilly had managed to win several hearts all around the country at the time defining herself purely as "Queen of Prep". She had a fair complexion with light brown hair and brown eyes. Being a multi-millionaire, Lilly lived a healthy lifestyle.