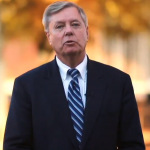 Lindsey Olin Graham is an American politician, military official, lawyer, and senator affiliated to the Republican Party, who serves as the senior United States Senator from South Carolina, a seat he has held since 2003. Since 2019, he has been the Chair of the Senate Committee on the Judiciary. Senator Graham has earned an 80.31% Lifetime Score from the American Conservative Union. Graham's political views often caused controversy: he was in favor of the "comprehensive immigration reform" where the Senator once said that "illegal aliens were needed to provide cheap labor for golf courses." He was in favor of the Federal Marriage Amendment, which opposes same-sex marriage.

What is Lindsey Graham famous for?

A retired U.S. Air Force Reserve colonel is best famous for being hailing the seat of senior United States Senator from South
Carolina three times since 2003 and currently the Chair of the Senate Committee on the Judiciary. During his incumbent, Graham is known in the Senate for his advocacy of a strong national defense and aggressive interventionist foreign policy. He is also known for his willingness to be bipartisan and work with Democrats on issues like campaign finance reform, a ban on waterboarding,
immigration reform, and judicial nominees.

When was Lindsey Graham born?

Lindsey Graham was born as Lindsey Olin Graham in Central, South Carolina, the USA on July 9, 1955, to parents, Millie (Walters) and Florence James "F.J." Graham who ran a restaurant-bar-pool hall-liquor store, the "Sanitary Cafe". His family was of Scots-Irish descent. His nationality is American and his religion is Christianity. His zodiac is Cancer. His mother died of Hodgkin's lymphoma, aged 52, and his father died 15 months later of a heart attack, aged 69 when he was 21. She helped to raise his younger sister, Darline Graham Nordone, after the deaths of his mother and father. Graham attends D. W. Daniel High School. He graduated from the University of South Carolina with a B.A. in psychology in 1977, and from the University of South Carolina School of Law with a J.D. in 1981. During his studies, he became a member of the Pi Kappa Phi social fraternity.

How is Lindsey Graham's career?

Graham started his career after he joined the US Air Force in 1982, serving as a defense attorney, judge and military prosecutor until 1988. Later his entire service in the Air Force played a key role in forge forward with his congressional career. His congressional career began when he was elected to the first of four terms to the United States House of Representatives, representing South Carolina's 3rd the congressional district from 1995 to 2003. During his incumbent, Graham served parallel in several committees of the house that includes, Committee of International Relations (1995-1998), Committee on Education and the Workforce (1995-2002), Judiciary Committee during the impeachment of Bill Clinton in 1998 and Committee on Armed Services (1999-2002). Graham also became a member of the J.
In 2002, Graham became the senator of South Carolina. He won a second term in 2008 and a third term in 2014.
Besides senator, he has served in several other committees including, Committee on Health, Education, Labor and Pensions (2003-2005), Committee on Agriculture, Nutrition and Forestry (2007-2009) and Committee on Intelligence (2007-2009). In 2009, Graham voted against Barack Obama's Patient Protection and Affordable Care Act. Graham ran his first and only presidential campaign between June and December 2015, dropping out before the 2016 Republican primaries began. Since March 2017, Graham has made a stance on Trump and has become a staunch ally of the president, often issuing public statements in his defense.

What is Lindsey Graham's net worth?

As a longtime senator, He has an annual salary of $174,000 and his estimated net worth is at 3 million dollars as of 2019. His major source of income is his position of senior United States Senator from South Carolina. Furthermore, since 2019, he has been the Chair of the Senate Committee on the Judiciary. Dating back his professional life and career he has served as US Air Force colonel and served in several committees during his reign in the US House Of Representatives. So adding all of these to an account he must have earned a massive sum until now. Moving on details about his cars, houses and other business are still under review.

Who is Lindsey Graham's wife?

Graham has never been married and has no children. He is currently single. Because of him not having a partner to this age, He has been rumored to be gay however he was later known to be the opposition to LGBT rights. Eventhough Graham seems to be a saint at present he has been in two loose relationships before which he has revealed from his 2015 self-published memoir, My Story. He dated a girl named Debbie while at law school back in 1981. Similarly, He has dated two other women while serving at airforce named Carol who was JAG officer and a Lufthansa flight attendant, Sylvia. Sylvia was the one who he wanted to propose but he never has the chance as she had to return to her home in Vienna and so was the Graham. Nevertheless, he is very happy with her younger sister to share their family love who is fond of Graham as nearly as making him the closest companion of life. Graham currently lives in Seneca, South Carolina is a Southern Baptist, and is a member of the Corinth Baptist Church.

How tall is Lindsey Graham?

Three times Senator from South Carolina, Lindsey is now 64 years old and he has a decent height of 5 Feet and 7.25 Inches tall.
Even with such age, Graham is not obese and he is quite fit and active to carry out his senate post responsibilities. He has a balanced weight of 68kg. Similarly, He has blue eyes and gray hair color. Furthermore, regarding his other body measurements, his body statistics are 40-32-38(Chest-Waist-Hip) inches. His dress and shoe size are currently unknown and are under view. Graham has straight sexual views.
Share This Article Facebook Twitter Pinterest Reddit