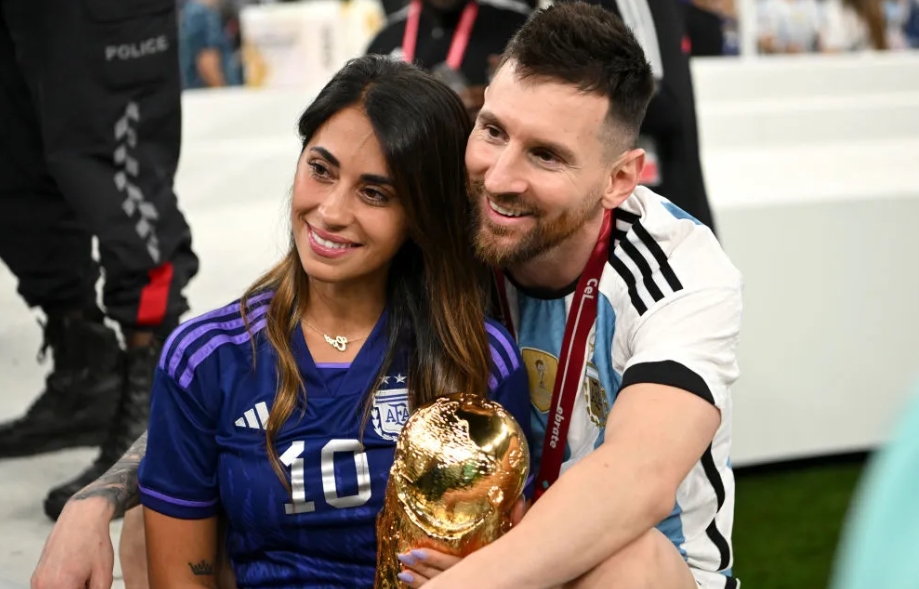 Professional footballer, Lionel Messi and his wife, Antonela Roccuzzo are childhood sweethearts as well as they are the proud parents of three children.

Most recently, Messi and Antonela Roccuzzo shared lovely pictures of the 2022 FIFA World Cup Win on their Instagram profiles. Before the final match, the fashion model shared photos wearing jerseys with Messi's number in a stadium pic with Thiago, Mateo, and Ciro with the caption "I CANT EXPLAIN IT BECAUSE YOU WONT UNDERSTAND!!!!. 🇦🇷🇦🇷🇦🇷🇦🇷🇦🇷🇦🇷 🇦🇷🇦🇷🇦🇷🇦🇷🇷🇦🇷🇦🇷🇦🇷🇦🇷 LET’S GO ARGENTINA!!! LETS GO @leomessi !!!!!".

Everything To Know About Antonela Roccuzzo

The couple knew each other since their childhood. Roccuzzo first met Messi when she was 5 years old in Argentina through her cousin Lucas Scaglia when he and Messi both were playing at the youth academy of Newell's Old Boys. Fans of Messi and Roccuzzo wondered how their love story began. Here we have presented their complete relationship timeline. 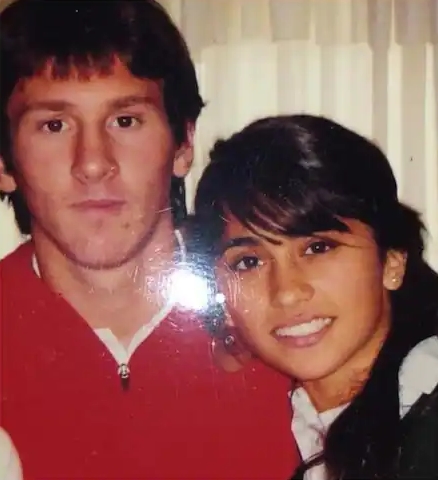 After Roccuzzo's best friend and Messi's friend dies suddenly in a car crash, he travels back to Argentina to support his childhood love. They then started to date in secret.

Lionel Messi and Antonela Roccuzzo reunited after the death of a mutual friend. There, Messi met his former childhood crush. In 2009, they make their relationship public.

The pair got engaged in a private ceremony in 2010. In June 2012, he celebrated a goal against Ecuador by tucking a ball under his shirt to portray a pregnant woman, effectively announcing that he and Antonella were expecting a child.

The duo announced in June 2012 that they were expecting their first child. On 2nd November 2012, the couple welcomed their first son, Thiago.

Roccuzzo gave birth to their second son, Mateo on September 11, 2015.

Messi and Antonela got married at a luxury hotel named Hotel City Center in Rosario on June 30, 2017, with about 260 guests attending the wedding including footballers such as Neymar, Luis Suarez, and Gerard Pique.

Their third son, Ciro took birth to the soccer star’s family on March 11, 2018. In the year, they faced divorce rumors during the 2018 World Cup. While Argentina was facing the early elimination from the 2018 World Cup, Antonella traveled to Russia to support her husband. It was initially reported that Antonella didn’t travel with Messi because they were having marriage problems. However, it turned out that Roccuzzo was in Argentina visiting her family. “I did not go because I have very young children and because it was scheduled like this,” Antonella told The Sun. “Moreover, I want to enjoy some time with my family who I am not going to see until December.” It is reported that Messi consulted Antonella about retiring from the Argentine National team. 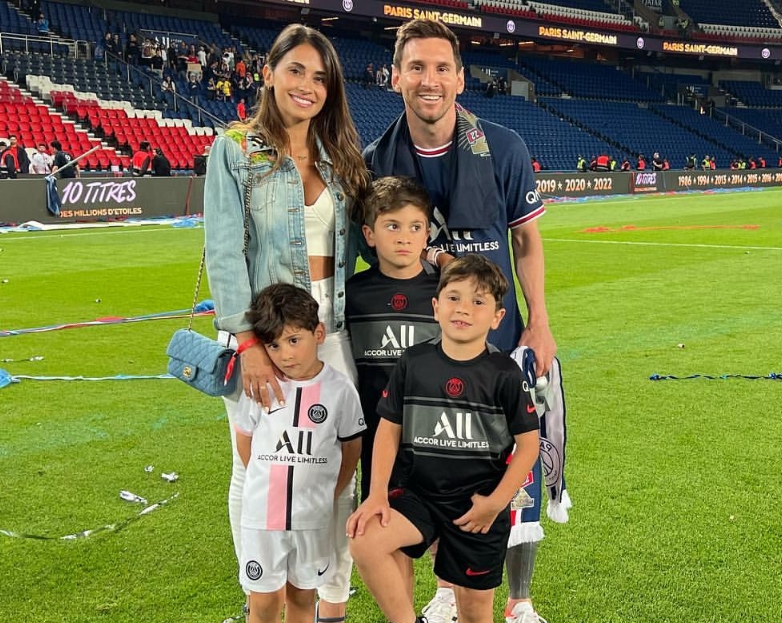 Roccuzzo and Messi were all smiles during a date night in Sitges, Spain.

Antonella wished Lionel a happy third anniversary by sharing a video of the couple’s wedding alongside the following caption: “‘…I’m going to love you and you’ll love me, I love you and it’s my only truth, and it’s our great love, which will never die…’” Happy 3rd anniversary my love. I love you @leomessi.”

When the couple marked their four-year anniversary as a married couple, Roccuzzo shared a video montage to Instagram from their ceremony and reception, writing in Spanish, ﻿"Feliz aniversario Amor ❤️4 años de este día… Por muchos más juntos. Te amo ❤️" In English, that roughly translates to: "Happy anniversary my love. Four years ago today, here's to many more together. I love you."

The mother of three gushed in Spanish via Instagram “I love you so much, my love❣️” sharing kissing snaps with Messi in front of the Eiffel Tower in Paris on 8th November 2021.

Messi posed with Roccuzzo and their family dog after recovering from his bout with the coronavirus. “Momentos ❤️❤️,” Roccuzzo wrote via Instagram, sharing a cuddly snap with her man.

The family of five were all smiles amid Messi's World Cup tournament.

Who is Lionel Messi? 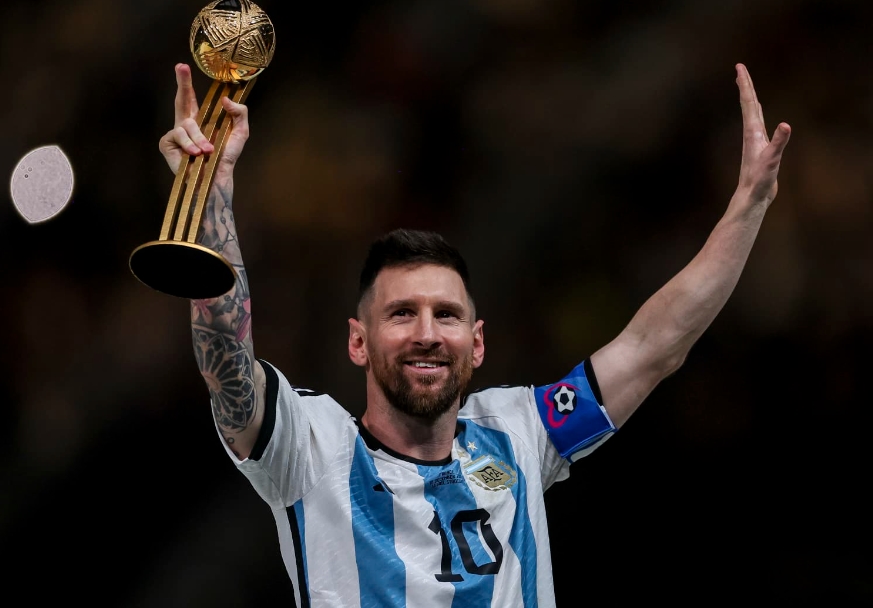 Everything To Know About Lionel Messi

By the age of five, he started playing football for a local club, Grandoli, which was coached by his father. Later, he started playing for the team, Barcelona. At 16 years, four months, and 23 days old, Messi made his first-team debut when he came on in the 75th minute during a friendly against José Mourinho's Porto on 16 November 2003. His progress was reflected in his first professional contract, signed on 4 February 2004, which lasted until 2012 and contained an initial buyout clause of €30 million. On 10 August 2021, he joined the French club Paris Saint-Germain. He signed a two-year deal until June 2023 with an option for an extra year.

Moving to his early life, Lionel Mess is the son of his father, Jorge Messi, and his mother, Celia Cuccittini. His father is a steel factory manager, whereas his mother worked in a magnet manufacturing workshop. He has two older brothers named Matias Messi and Rodrigo Messi, and one sister named Maria Sol Messi.

With $104 million as his total earnings, Messi was the 5th highest-paid celebrity of 2020 as per Forbes. In April 2021, he purchased a 5,515-square-foot condo on the 9th floor of a luxury apartment building in Sunny Isles Beach in Miami for $7.3 million.

Who is Antonela Roccuzzo?

The 34-year-old, Antonela Roccuzzo (born on February 26, 1988) is an Argentinian media personality as well as a former model who is renowned for being the wife of world-renowned football legend, Lionel Messi. She is referred to as one of the most popular and influential football WAGs  (wives and girlfriends of footballers) in the world.

Antonela started her career as a model in the late 2000s. In November 2016, she signed a modeling contract with the Argentine luxurious fashion brand Ricky Sarkany based in Buenos Aires. In 2017, she opened a Barcelona outpost for the brand alongside her good friend, Sofia Balbi, Luis Suarez’s wife. She has also worked with the likes of Stella McCartney, Adidas, and Alo Yoga. Today, she is taking care of her three kids as well as she is handling her business and modeling contract. 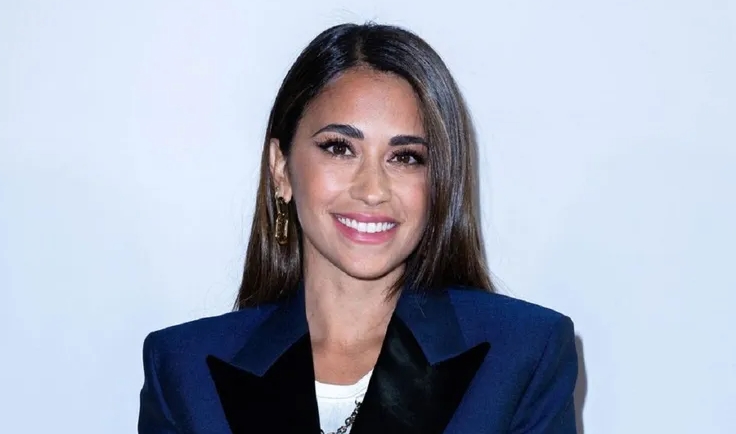 Antonela is from Rosario, Santa Fé, Argentina. She is the daughter of his father, Jose Roccuzzo, and his mother, Patricia Blanko. She has two siblings - Paula Roccuzzo and Carla Roccuzzo. She studied Nutrition Science at the Universidad Nacional de Rosario. She has tattoos bearing her 3 sons’ names on her hands. She has a queen crown tattoo (corresponding with Lionel’s king crown tattoo) on her right arm.