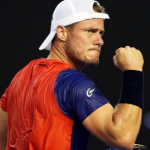 Lleyton Glynn Hewitt well known as Lleyton Hewitt is an Australian tennis player who has won two Grand Slam singles titles and became the youngest male to hold the world's No. 1 ranking at the age of 20. He has won the 2001 US Open and 2002 Wimbledon men's singles titles, the 2000 US Open men's doubles title, back-to-back Tennis Masters Cup titles in 2001 and 2002, and the Davis Cup with Australia in 1999 and 2003. He reached the final of the 2004 US Open, where he was defeated by Roger Federer. He plays by Right handed.

'It was such a whirlwind': Bec Hewitt recalls the first time she met tennis star husband Lleyton as her 13-year marriage continues to battle split rumors.

On 24th February 1981, Hewitt was born with a birth name of Lleyton Glynn Hewitt in Adelaide, South Australia, Australia. He holds a nationality of Australian. He was born to Glynn, his father, and Cherilyn, his mother. His father was a former Australian Rules Football player and his mother is a physical education teacher. He also has a younger sister named Jaslyn Hewitt who is a former tennis coach.

Hewitt has got a very sexy body. He stands 1.78m tall and has a balanced healthy body of 77 Kg. He keeps his body fit. His charming face and smile attract a lot of fans towards him.

Hewitt is a married man. He married Bec Cartwright, Actress in the year 2005 July 21. They had been dating for six years. The couple has altogether three children and expecting for next baby as her wife, Bec is pregnant. They live in Nassau, Bahamas.

Previously, Hewitt started his relationship with Kum Clijsters, Belgian Tennis player in the year 2000 during the Australian time. The couple announced their engagement in the year 2003 and got separated in the year 2004.

Net worth of Hewitt

The net worth of this famous professional tennis player of Australia is in million. His current net worth as of 2018 is estimated to have around $15 Million. He is earning a good amount of money from his work and he is satisfied with his earning. His exact salary is not revealed yet but his salary is also in million. In total, he has received US Dollar $20,849,000 prize money. He is a very successful person in his personal life as well as in his professional life.