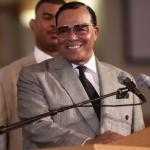 Louis Farrakhan Sr. popularly known as Louis Farrakhan and formerly known as Louis X is an American black nationalist and minister. He is the leader of the religious group Nation of Islam (NOI). He previously served as the minister of mosques in Boston and Harlem. He had also been appointed National Representative of the Nation of Islam by former NOI leader Elijah Muhammad.

What is Louis Farrakhan Famous For?

- Leader of Nation of Islam.

Where was Louis Farrakhan Born?

Louis Farrakhan was born on 11 May 1933. His birth name is Louis Eugene Walcott. He was born to a father, Percival Clark, and a mother, Sarah Mae Manning. His birth place is in The Bronx, New York City in the United States. He holds American nationality. He is of Jamaican on his father's side. His parents separated before he was born. He never knew his biological father. His mother then moved in with Louis Walcott. Walcott became his stepfather. His stepfather died in 1936 and the Walcott family moved to Boston, Massachusetts.

He started playing the violin at an early age and has won awards for his performance.

He started his professional music career in the 1950s. He recorded several calypso albums as a singer under the name "The Charmer".

One of his songs was on the top 100 Billboard Chart for five years in a row.

He first came in contact with the teaching of the Nation of Islam (NOI) through Rodney Smith. Smith was his friend and saxophonist from Boston.

Walcott and his wife joined the NOI in 1955. He became a registered Muslim/registered believer/registered laborer in the NOI.

He received his "X", considered as a placeholder indicating that Nation of Islam members' original African family names had been lost. Members of NOI used the "X" while waiting for their Islamic names.

He became the assistant minister to Malcolm X after nine months turning into Muslim.

Malcolm X was assassinated in 1965.

Farrakhan became the national spokesman/national representative of NOI and minister of the influential Harlem Mosque (Temple).

Following the death of Elijah Muhammad in February 1975, his son Warith Deen Mohammed became the leader of the Nation of Islam.

He became a Sunni Imam under Warith for 3 and a half year until 1978.

In 1978, Farrakhan and a small number of supporters decided to rebuild what they considered the original Nation of Isam upon the foundations established by Wallace Fard Muhammad, and Elijah Muhammad.

His group founded a weekly newspaper, The Final Call, Inc. in 1979.

Farrakhan and his supporters held their first Saviours' Day convention in 1981 in Chicago, Illinois. They also took back the name of the Nation of Islam.

Farrakhan convened a broad coalition in Washington D.C. for the Million Man March in 1995. Approximately 440,000 attended the march.

He commented in 2005 that the leeves in New Orleans were deliberately destroyed after Hurricane Katrina to wipe out the population of the largely black sections within the city.

He supported then-Senator Barach Obama in 2008. By 2011, he was no longer supporting then-president Obama. He opposed Obama's military interventionism overseas.

He has publicly announced his embrace of Dianetics. The Nation of Islam has been hosting its own Dianetic courses since 2010.

He praised Republican Donald Trump during the 2016 presidential election.

He has been the center of several controversies. He is criticized as antisemitic or racist in terms of his political views.

He has been criticized for referring to Judaism as a "gutter religion". However, he has repeatedly denied it.

He visited Kahal Kodash Shaare Shalom in Kingston, Jamaica in March 2002 in an attempt to repair his controversial relationship with the Jewish community. It was his first visit to a synagogue.

He was named Black Hitler by Nathan Pearlmutter and Nat Hentoff.

Some of his antisemitic comments were listed on Top 10 antisemitic slurs by Simon Wiesenthal Center in 2012.

He made antisemitic comments during his May 2013 visit to Detroit. He accused Jews of involvement in the September 11 attacks in March 2015.

Farrakhan is also one of the several persons accused of being involved in the plot to assassinate Malcolm X.

He received sexual discrimination complaints filed with a New York state agency when he banned women from attending a speech he gave in a city-owned theater in 1993. He gave a speech only women could attend the following year.

He was banned from Facebook in May 2019 for his history of antisemitic comments. Some other high-profile personnel banned from facebook are conspiracy theorist Alex Jones, anti-Semite Paul Nehlen, and fringe right-wing media personalities Laura Loomer, Milo Yiannopoulos, and Paul Joseph Watson.

He sidelined his musical career when he joined the Nation of Islam. 42 years later, he decided to take up the violin once more primarily due to the urging of prominent classical musician Sylvia Olden Lee.

He made his return concert debut in April 1993. He performed the Violin Concerto in E Minor by Felix Mendelssohn.

Who is Louis Farrakhan Married to?

Louis Farrakhan is a married man. He is married to Betsy Ross. She took the name Khadijah Farrakhan after she joined the Nation of Islam. The couple got married in 1953. They have 9 children together. He has 4 sons, Mustapha, Joshua Nasir, Abnar, and Louis Jr., and 5 daughters, Donna, Hanan, Maria, Fatimah, and Khallada.

He lives in Kenwood, Chicago, Illinois.

He underwent major abdominal surgery in January 2007 to correct damage caused by side effects of a radioactive "seed" implantation procedure that he received years earlier to successfully treat prostate cancer.

He announced in December 2013 that he had not appeared publicly for two months because he had suffered a heart attack in October 2013.

Trivias About Louis Farrakhan You Need To Know.