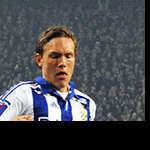 Hans Carl Ludwig Augustinsson is a Swedish professional footballer. He is popularly known as Ludwig Augustinson.He plays  as a left-back for Sweden National Team and German Bundesliga club, WerderBremen. . A product of Brommapojkarna's academy, he played two senior seasons with the club before leaving for IFK Göteborg in 2013.

Ludwig Augustinsson was born on 21 April 1994 in Stockholm, Sweden. He was from sports family as his father, Hans Augustinsson in Swedish division 1 and mother, Elizabeth Hans Augustinsson is a woman volleyball player who played for Sweden at the national level and his younger brother  Jonathan Augustinsson who plays as a left back for Swedish top league, Allsvenskan in Djurgardens IF.

A product of Brommapojkarna's academy, he played two senior seasons with the club before leaving for IFK Göteborg in 2013.  A move to Copenhagen followed in January 2015 for an estimated record fee of €1.4 million which is the highest fee for any left back from Sweden. Augustinsson was part of the Sweden under-21 squad that qualified and later won the European U21 Championship in 2015. He made his first appearance for the senior national team in January 2015, and was part of Sweden's Euro 2016  and FIFA World Cup 2018 Russia.