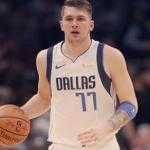 Luka Doncic is a Slovenian professional basketball player who plays for the Dallas Mavericks of the National Basketball Association (NBA) and the Slovenian national team. He rose to prominence while playing for Union Olimpija in Slovenia. He played for Real Madrid from 2015 to 2018. He earned EuroLeague MVP and EuroLeague Final Four MVP award, at the age of 19, in 2018. He was also named the ACB Most Valuable Player, ACB Best Young Player and has won back-to-back EuroLeague Rising Star.

In 2016, he made his senior debut for Slovenia. He was 17 at the time. He helped Slovenia to win its first EuroBasket title in 2017. He was also named in the All-Tournament Team.

Luka Doncic was born on 28 February 1999. He was born to Sasa Doncic and Mirjam Poterbin in Ljubljana in Slovenia. He holds Slovenian nationality. His zodiac sign is Pisces. He quit playing other sports including football after he grew too tall. He attended Osnovna soal Mirana Jarca. A Greek professional basketball player Vassilis Spanoulis was his idol while growing up.

He played for the club's under-12 selection team, as he was excluded from the club's Under-14 team due to league rules.

In 2011, he represented Olimpija at the Under-14 Vasas Intesa Sanpaolo Cup in Budapest, where he was named Most Valuable Player and Olimpija finished as runners-up.

In February, Olimpija loaned him to Spanish club Real Madrid to play in the Minicopa Endesa, where Real Madrid finished as the runners-up and he won MVP honors.

In 2012, he helped Olimpija to win Under-13 Lido di Roma Tournament and earned himself an MVP honor.

Real Madrid signed a five-year contract with him in September 2012.

He helped Real Madrid to win the Minicopa Endesa in February 2013.

In March 2013, he earned MVP accolades of the under-16 Spain Championship.

He won all-league honorable mention accolades from the basketball website Eurobasket.com at the end of the 2014-15 season.

In January 2015, he won the under-18 Ciutat de L'Hospitalet Tournament and was named in the All-Tournament Team.

Doncic made his professional debut for Real Madrid in April 2015 against Unicaja in the Liga ACB.

He became the youngest player to ever play for Real Madrid in the ACB and the third-youngest debutant in league history.

He became the 21st player ever to debut in the EuroLeague before turning 17.

He set a new ACB record for most points and highest Performance Index Rating (PIR) in a game for players under age 17 after he achieved a season-high 15 points, 6 rebounds, and 4 assists against Bilbao.

At the end of 2016-17 season, he was named EuroLeague Rising Star by a unanimous vote. He also earned the ACB Best Young Player Award.

He was named EuroLeague MVP, EuroLeague Final Four MVP at the end of 2017-18 season.

He has won EuroLeague Rising Star award twice in consecutive years in 2017 and in 2018.

Atlanta Hawks selected him with the third overall pick in the 2018 NBA draft.

The Hawks then traded him to Dallas Mavericks. He signed a rookie contract with the Mavericks in July 2018.

He became the youngest 20-points scorer in franchise history as he made 31 points and 8 rebounds against Minnesota Timberwolves.

He was named NBA Rookie of the Month in the Western Conference for the month of November 2018.

He represented Slovenia junior team in a friendly tournament in Hungary in 2014. He helped Slovenia to win its first gold medal in EuroBasket 2017. He was also named in the All-Tournament Team.

No information regarding his affairs has come to light. He is reportedly single. He is focused on to his NBA career. However, he is linked with a Slovenian Lingerie model, Anamaria Goltes.

His godfather is also a former NBA player, Radoslav Nesterovic.

He can speak four languages, Slovenian, English, Spanish, and Serbian. He has the a tattoo of a tiger image on his left forearm. He also has a tattoo of the EuroBasket 2017 cup on his right hip after he helped his country to win the EuroBasket 2017. He has other tattoos of a the Latin phrase "Non desitas, non exieris" and his jersey number 7.

He has a Pomeranian dog, Hugo.

Net Worth of Luka Doncic

His net worth is under review. Detail information will be updated soon.

Trivias About Luka Doncic You Need To Know.