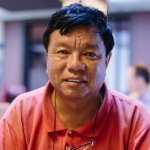 Mahabir Pun is a Nepali scientist, teacher, social entrepreneur, and activist who is best known for being the creator and leader of the Nepal Wireless Networking Project(NWNP). This project received international recognition including the Magsaysay Award for his work in this field. He was inducted into the Internet Hall of Fame and was awarded the Jonathan B. Postel Service Award by the Internet Society in 2014.

What is Mahabir Pun famous for?

When and where was Mahabir Pun born?

Mahabir Pun was born on January 22, 1955, in Nangi Village, Myagdi, Nepal. His birth name is Mahabir Pun Phagami. He holds a Nepali nationality. His ethnicity is Asian while Aquarius is his zodiac sign.

Pun was born as the oldest child to Krishna Pun(father) and Purbi Pun(mother). His father was a former British army. He was raised in his hometown, Nangi, a remote village in the mountainous district Myagdi District of western Nepal. He spent his childhood grazing cattle and sheep.

He attended a village school without paper, pencils, textbooks, or qualified teachers. After his father got retired from the British army, his family moved to the southern plains of Nepal for Pun's better education and life. He then joined Khairahani Higher Secondary School in Chitwan. However, he could not continue his education after graduating from high school due to financial problems.

He worked as a teacher for about 12 years in four schools to support his brothers' and sisters' education and he also joined Amrit Science Campus(ASCOL) to continue his further studies. He applied to several universities in UK and US for years. Finally, after earning a partial scholarship, he attended the University of Nebraska at Kearney and got graduated with a bachelor's degree in Science Education in 1992.

Pun then returned to his hometown. After observing the critical need for sustainable education for native children, he founded the Himanchal High School which specially focuses on computer education and other programs with income-generating capacity. Later, he returned to the University of Nebraska and got graduated with a master's degree in Educational Administration in 2001.

Who is Mahabir Pun's Wife?

Mahabir Pun is a married man. He is currently married to his only wife, Om Maya Pun. Om Maya is his childhood love. The couple tied the knot in June 1988. The couple is blessed with a daughter, June Pun who was born on September 20, 1998, in Pokhara. His wife did not go along with him to live in his parent's home in Chitwan. Pun and his family are happily living together in Kathmandu, Nepal.

How much is Mahabir Pun's worth?

Mahabir Pun has earned a good amount of money from his profession as a scientist, teacher, social entrepreneur, and activist. Having started his career as a teacher, Pun has a come long way becoming the national hero of Nepal for his contribution to the educational system and economic development of Nepal. Including all of his earnings, Pun has an estimated net worth of around $2 million as of 2022. However, he spends most of his income on innovations and inventions.

How tall is Mahabir Pun?

Mahabir Pun is a handsome man with a well-maintained body physique in his mid-60s. He has a fair complexion with black hair and a pair of brown eyes. He stands tall with a height of 5ft 11 inches(1.8) and has a bodyweight of 73kg(160 lbs). His shoe size is 7(US).

Trivias About Mahabir Pun You Need To Know.