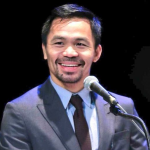 The Filipino professional boxer and politician, currently serving as a Senator of the Philippines is Emmanuel Dapidran Pacquiao. He is professionally known as Manny Pacquiao. He currently ranks number 4 in BoxRec's ranking of the greatest pound for pound boxers of all time. In 2006, 2008 and 2011, he won the award and became ‘Ring magazine’ and ‘BWAA Fighter of the Year’. In 2009 and 2010, he won the ‘Best Fighter ESPY Award’.

He is also the first boxer in history to win major world titles in four of the original eight weight classes of boxing known as the "glamour divisions" in flyweight, featherweight, lightweight, and welterweight.

Manny Pacquiao’s real name is Emmanuel Dapidran Pacquiao on 17 December 1978 at Kibawe, Bukidnon, Philippines. He was born to Rosalio Pacquiao and Dionisia Dapidran-Pacquiao. His parents separated when he was in grade six. He completed his elementary education at Saavedra Saway Elementary School. He was awarded a high school diploma by the Department of Education. For a college degree in business management, he enrolled at Notre Dame of Dadiangas University (NDDU).

Pacquiao’s height is 1.66 m and weight is 70 kg. His hair color is black and the eye color is dark brown. Overall, he has the balanced and healthy body.

Pacquiao is a married man. On 10 May 2000, he has married to Jinkee Pacquiao who is the vice governor of Sarangani. The couple has five children together – Jemuel, Michael, Mary Divine Grace, Queen Elizabeth, and Israel Pacquiao.

Pacquiao’s net worth is estimated to be $190 million.

Trivias About Manny Pacquiao You Need To Know.