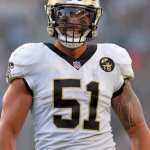 Manti Te'o is an American footballer who is a free agent. His playing position is linebacker. He played college football at Notre Dame, where he was a consensus All-American and received eight national awards. He was drafted by the San Diego Chargers in the second round of the 2013 NFL Draft. On March 21, 2017, Te'o signed a two-year contract with the New Orleans Saints. On October 20, 2020, Te'o was signed to the Chicago Bears practice squad. His practice squad contract with the team expired after the season on January 18, 2021. It was announced that Te'o's experience would be the subject of a two-part Netflix documentary, Untold: The Girlfriend Who Didn't Exist, which was released in August 2022.

What is Manti Te'o Famous For?

What is Manti Te'o Birth Name?

On January 26, 1991, Manti Te'o took birth in Laie, Hawaii. His birth name is Manti Malietau Louis Te'o. His nationality is Hawaiian-American and his ethnicity is Mixed as he has Samoan ancestry. His present age is 31 as of 2022. He is the son of Brian and Ottilia Te'o and has five siblings: sisters BrieAnne, Tiare, Eden and Maya and brother Manasseh. He attended and played for Punahou School (Honolulu, Hawaii). As a junior in 2007, Te'o was named the state defensive player of the year by the Honolulu Advertiser and the Gatorade state player of the year. He achieved first-team all-state honors while totaling 90 tackles and five sacks on defense and 400 rushing yards and ten touchdowns as a running back. During his senior year, Te'o helped lead Punahou to its first-ever state championship in football during the 2008 season. He was named the 2008 Sporting News High School Athlete of the Year, becoming the first person from the state of Hawaii and the first athlete of Polynesian descent to receive the award. He is only the third high school player from Hawaii to be named to the USA Today All-American team, after Pat Kesi in 1990 and Jason Ching in 1995 (Ching, too, is a Punahou and Notre Dame alumnus). On January 10, 2010, Te'o was named the Hawaii State Defensive Player of the Decade (2000–2009) by the Honolulu Advertiser. He was nationally regarded as one of the elite prospects of the class of 2009. On National Signing Day of 2009, Te'o committed to the University of Notre Dame.  He played for the Notre Dame Fighting Irish football team from 2009 to 2012. He made his first collegiate start in the Irish's game versus Purdue. He played in all 12 games of his freshman season and finished the season with 63 tackles. Freshman All-American by College Football News. He was also named a second-team Freshman All-American by Rivals.com. On April 30, 2010, Te'o was named to the 2010 Lombardi Award & Nagurski Award watch lists. He announced on December 11, 2011, that he would return to Notre Dame for his senior season.

What is Manti Te'o Net Worth?

Manti Te'o is a free-agent linebacker in American football. His present net worth is estimated to have $4 Million. His present salary is $132,000 as of 2022. His main source of wealth comes from his football career and he is living a lavish lifestyle at present. His annual income is assumed to be above $1 Million. Details about his assets and mansion are still to get unfold yet.

Who is Manti Te'o Girlfriend?

Manti Te'o is a married man. In February 2020, he became engaged to his girlfriend, personal trainer, and beauty consultant Jovi Nicole Engbino. The couple married in La Jolla, California on August 29, 2020. Today, the happily married couple is enjoying their life a lot. His sexual orientation is straight. 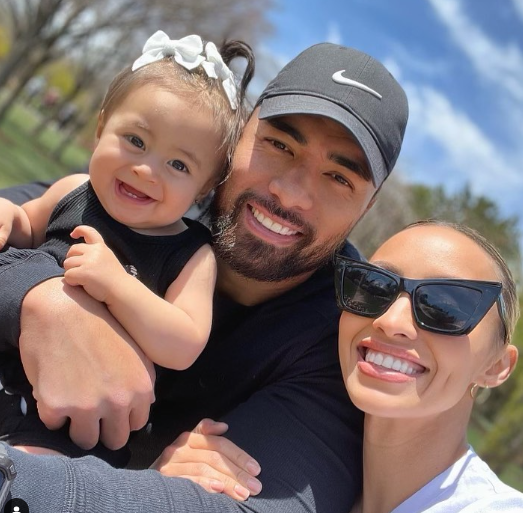 It was announced that Te'o's experience would be the subject of a two-part Netflix documentary, Untold: The Girlfriend Who Didn't Exist, which was released in August 2022.

Regarding his controversy, Manti Te'o fell for a lie and ended up dating a woman who never existed. Everything began when he started dating Lennay Kekua, whom he met online, and they dated for about a year. A vehicle accident and subsequent leukemia diagnosis meant that the woman spent the majority of that period in the hospital. She resided in California and he in Indiana, but they spoke on the phone every day, and he ended up being one of her biggest supporters as she battled the illness. Te'o learned that his grandmother and partner had passed away six hours apart in October 2012, but the American football player skipped his wife’s burial. It was determined that the woman didn’t exist a few months after the incident. In actuality, a youngster had impersonated Lennay Kekua. To complete the story, he made a phony social media profile and killed off the persona he had constructed. Te'o had consequently become a victim of catfishing. After the media commotion the alleged deceased girlfriend, Ronaiah Tuiasosopo, revealed himself. Tuiasosopo has been described as a family friend or acquaintance of Te'o.

How tall is Manti Te'o?

Manti Te'o is a handsome man with a tall height of 6 ft 1 in (1.85 m) and his body weight consists of 241 lb (109 kg). He has got a healthy body and he maintains his body a lot by doing frequent exercise. His hair color is black and his eye color is brown. He has also inked tattoos on his arms. He has a medium-length beard which suits him well.