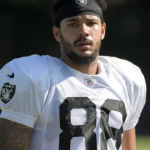 Marcell Ateman is a popular American football wide receiver who plays for the Oakland Raiders of the National Football League (NFL) by wearing jersey number of 88.

23-Years, Marcell Ateman was born on 16th September 1994 in Dallas Texas, USA. He was born to Arlene Ateman, his mother, and Ronald Ateman, his father. His nationality is American. He attended Wylie East High School and graduated from Oklahoma State.

This brilliant player has got a height of 1.93 m and balanced weight of 100 Kg.

Net Worth and Salary of Marcell

The exact net worth of Marcell is still to get unfold. The salary of Marcell is $480K as a contract. He is earning a good amount of money.

Marcell is not married yet. He is still single. Being a star football wide receiver, he has not revealed his love life to the media.

Trivias About Marcell Ateman You Need To Know.