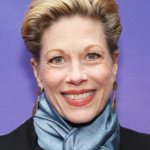 Marin Joy Mazzie famed as Marin Mazzie was an American actress and singer known for her work in musical theater. She has won Outer Critics Circle Award and also she was a three-time Tony Award nominee for her best performance. She also appeared on Broadway in Ragtime, Carrie, and Kiss Me, Kate

Marin Mazzie was born on 9th October in the year of 1960 in Rockford, USA. Her real name is Marin Joy Mazzie. She graduated from Western Michigan University. She began to perform and sing in the church choir at the age of 8.

Marin was a married woman. She was married to Jason Danieley, actor in the year 1997. She met Jason in the year 2996 where they performed together, "Trojan Women: A Love Story".

Net worth of Marin

Trivias About Marin Mazzie You Need To Know.