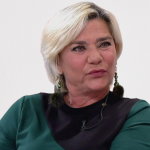 Marina Mota is a Portuguese actress, producer, and singer who is best known for her role in "Fascinios", "That Beijo", and "Destinos Cruzados". She made her first television appearance in 1988 by appearing in the Portuguese TV series "Take It Magazine". She portrayed the role of Antonia Novasis in the Portuguese telenovela "Para Semper" from 2021-to 2022. She has also acted in various movie theatres including "A Crime of Luxury", "Bloodlines", and "Portugal is not for sale". Besides, Marina is active in the social media platform with around 60k followers on her Instagram account: @_marina_mota_oficial

What is Marina Mota famous for?

Where was Marina Mota born?

Marina Mota was born on October 7, 1962, in Lisbon, Portugal. Her birth name is Marina da Conceição Ribeiro Mota. She holds Portuguese nationality. Her ethnicity is White caucasian while Libra is her zodiac sign.

Marina was born and raised in the Alcântara neighborhood of Lisbon. She has two younger sisters, Susana and Maria Amália. She did her schooling at Francisco Arruda School. Since her childhood, she was interested in singing. Her father, Luís Rodrigues Mota, and her mother always supported her in her decision to pursue her career in acting. So, she participated in several shows and also won the first Children's Song Festival at the age of 10.

Who is Marina Mota's husband?

Marina Mota is currently single. Previously, she was married to Carlos Cunha. Carlos is also a Portuguese actor who is known for his role in "Sabadabadu". The couple tied the knot in September 1982 after Marina became pregnant with their daughter, Érika. Later, the couple got divorced in 1996 after 14 years of their marriage. She then moved on and had a long relationship with the former Portuguese football player, Oceano Andrade da Cruz. She is now the grandmother of two children, Aléxia and Gabriel.

How much is Marina Mota's Worth?

Marina Mota has earned a good amount of money from her profession as an actress, producer, and singer. Having started her career in 1982, Marina has come a long way becoming a famous Portuguese actress in her 40 years long career. She has acted and produced various hit TV series, earning a handsome sum of money. Including all of her earnings, Marina has an estimated net worth of $9 million as of 2022.

How tall is Marina Mota?

Marina Mota is a beautiful woman in her late 50s. She has a fair complexion with light brown hair and a pair of brown eyes. She stands tall with a height of 5ft 5inches and has a bodyweight of 60kg. Her shoe size is 6(US).

Trivias About Marina Mota You Need To Know.