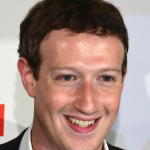 Mark Elliot Zuckerberg famed as Mark Zuckerberg is an entrepreneur who is well-known for being the co-founder of Facebook as well as its chairman and chief executive officer. He also co-founded and is a board member of the solar sail spacecraft development project Breakthrough Starshot. On 4th February 2004, he launched Facebook from his dormitory room with college roommates Eduardo Saverin, Andrew McCollum, Dustin Moskovitz, and Chris Hughes. His net worth is estimated to be $71.7 billion as of 24th October 2019, increasing over the past year with Facebook stock as a whole. He was ranked 10th on Forbes list of The World's Most Powerful People as of December 2016. Overall, he is a very talented person.

Former Secretary of State Hillary Clinton came out swinging against the use of big data in political campaigns Friday night in New York City. Clinton said privacy rights are “one of the cardinal challenges” facing democracy. She appeared at an event in support of the Netflix documentary “The Great Hack,” which examines the U.K.-based data firm Cambridge Analytica and its role in the 2016 election, Brexit, as well as elections in Trinidad and Tobago and Kenya. Speaking pointedly to Facebook founder Mark Zuckerberg, she urged him to act quickly to combat disinformation spread through fake political ads on Facebook. “Mark Zuckerberg should pay a price for what he is doing to ourdemocracy,” said Clinton.

Top Republicans are privately worried about a new threat to President Trump’s campaign: the possibility of Facebook pulling a Twitter and banning political ads. Facebook says it won't, but future regulatory pressure could change that. If Facebook were to ban or even limit ads, it could upend Trump’s fundraising and re-election plan, GOP officials told. His campaign has mastered the art of using Facebook’s precision-targeting of people to raise money, stir opposition to impeachment, move voters and even sell Trump shirts and hats.

Who are the Parents and Siblings of Mark Zuckerberg?

Mark Zuckerberg was born on 14th May 1984 as Mark Elliot Zuckerberg which was his birth name. He experienced his childhood in White Plains, New York, the USA. He belongs to American nationality whereas his ethnicity is White. His father was a dentist and his mother was a psychiatrist. He is Jewish and his horoscope sign is Taurus. He was born to his parents; Edward Zuckerberg (Father) and Karen Zuckerberg (Mother). Randi Zuckerberg, Donna Zuckerberg, and Arielle Zuckerberg are his three sisters. His religion is Christianity and Buddhism. He attended Ardsley High School and later he attended New York Philips Academy. He also attended Mercy College while he was still in high school. After Graduation, he attended Harvard University. He stated that he could read and write French, Hebrew, Latin, and ancient Greek. As of 2019, he celebrated his 35th birthday with his friends and families.

How tall is Mark Zuckerberg?

Mark Zuckerberg is a very handsome person with a slim body build. He has got a Hazel Grey eye color whereas his hair color is Goldish Brown. He has got a perfect height matching with his body weight. He stands at the tall height of five feet seven inches and his balanced weight consist of 70 Kg. His other information regarding the body measurement will is updated soon as it has not been revealed by himself neither it has been published on any internet websites. His smiling face and charming personality have helped him to gain the attention of all the viewers towards him. He makes an effort to find time for exercise in his packed schedule as he believes working out gives him more energy. He also aims to workout at least three times a week. His preferred time for a workout is in the morning. Also, he occasionally heads out for a run with his pet dog. He is not very choosy and eats whatever he feels like. He doesn’t like wasting his time on deciding small things such as what to eat. Overall, he has got a healthy body.

How was the Career of Mark Zuckerberg?

Who is the Wife of Mark Zuckerberg?

Regarding the marital status of Mark Zuckerberg, the founder of Facebook, he is a married person. He was married to his beautiful wife, Priscilla Chan. He met Priscilla Chan, at a fraternity party during his sophomore year at Harvard. They began dating in 2003. On 19th May 2012, Mark and Priscilla married in his backyard in an event that also celebrated her graduation from medical school. He announced on 31st July 2015 that the couple was expecting a baby girl and revealed that Chan had experienced three miscarriages previously. He announced the birth of their daughter, Maxima Chan Zuckerberg ("Max") on 1st December 2015. They welcomed their second daughter, August, in August 2017. At present, he is leading a blissful and happy family life. Both understand each other very well and both of them respect each other and it’s visible. The couples are less likely to divorce, however, it’s too early to predict anything. She is always there to support him. Both of them are living a happy married life. He is having a great family life.

What is the Net Worth of Mark Zuckerberg?

Mark Zuckerberg is an internet entrepreneur and philanthropist from America. He co-founded Facebook and serves as its current chairman and chief executive officer. He is earning an enormous amount of money from an Internet entrepreneur and computer programmer. He also earns from advertisements given by Facebook for other companies which add up to his total net worth that is estimated to be $ 71.7 billion as of 24th October 2019. His estimated salary is $1 Million at present. His major source of income is from his Facebook. He is very sincere towards his work and he never takes work for granted. His experiences and his knowledge is something incredibly valuable. He would be an asset to any organization. He is highly loved and admired by his fans for his work. He is an inspiration to many aspiring computer programmers. He has appeared in a social cause TV advert for Code.org to raise awareness about child advocacy and education.

Trivias About Mark Zuckerberg You Need To Know.