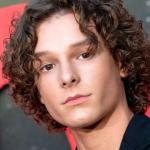 Mason Thames is an American actor. He is best known for his role as Finney Blake in the 2021 horror-thriller film, The Black Phone. His interest in performing started at an early age and had already started acting at the age of 11. Having starred in several movies and tv shows, he garnered mainstream recognition after he starred in The Black Phone. He is also known for his works in Boys of Summer and For All Mankind. The film, Boys of Summer is scheduled to release in 2022.

What is Mason Thames Famous For?

Where is Mason Thames From?

Mason Thames was born on 10 July 2007. He was born in Phoenix, Arizona in the United States and holds American nationality. He belongs to the white ethnicity and his religion is Christianity. His zodiac sign is Cancer. He has an older sister named Brooke Madison. Information about his parents is not known.

Who is Mason Thames Girlfriend?

Mason Thames is too young to get married. At present, he is not dating anyone. He lives in Los Angeles, California.

What is Mason Thames Height?

What is Mason Thames Net Worth?

Mason Thames earns from his acting career. A rising star, he started acting at the age of 11. He has already starred in lead roles in a couple of movies and has a bright future ahead in Hollywood. At present, his net worth is estimated at $1 million.

Trivias About Mason Thames You Need To Know.