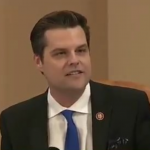 Matt Gaetz is a well known American lawyer and politician who has been serving as the US representative for Florida's 1st congressional district since 2017. He is also a member of the Republican party and is currently serving as a Congressman. Previously, Gaetz was also a member of the Florida House of Representatives for four long years. Currently, Gaetz has come upon as a staunch defender of President Donald Trump and was previously arrested in 2008 on suspicion of DUI before he was elected to the Florida House.

What is Matt Gaetz famous for?

Where was Matt Gaetz Born?

Matt Gaetz was born on May 7, 1982, in Hollywood, Florida, United States. His birth name is Matthew Louis Gaetz II. His nationality is American. Gaetz belongs to White ethnicity while is his zodiac sign.

Matt Gaetz was born in a well-to-do family and is the son of Don Gaetz(father) & Victoria Quertermous(mother). His father Don, is also a Republican politician who served as a member of the Florida State Senate for 10 long years. Further his grandfather, Jerry Gaetz was the mayor of Rugby, North Dakota.

Gaetz was raised in his hometown by his parents along with his younger sister Erin who was the director of digital content for Jeb Bush's 2016 presidential campaign. He graduated from Florida State University in 2003 with a B.S. degree in Interdisciplinary Sciences. Later, he graduated from the College of William and Mary in 2007 with a J.D. degree. After he got graduated from the law school, he started working at a law firm in Fort Walton Beach.

Who is Matt Gaetz Married to?

The 37 years old congressman, Matt Gaetz isn't married yet and is single. Also, none of his romantic unions has managed to surface the media yet.  Gaetz was even arrested on suspicion of DUI on October 30, 2008.

What is Net Worth of Matt Gaetz?

Matt Gaetz has quiet good earning through his professional career mainly as a politician and as well as a lawyer. Gaetz has managed to amass a fortune worth million dollars throughout his career to date from his service for the government for the past few years. Gaetz's estimated net worth is around $27 million. He even earns a few of his extra dollars through his family background and through his some business as well.

Besides, he even donated $200,000 of his money to his congressional campaign back then.

How Tall is Matt Gaetz?

Matt Gaetz has an average body physique. Gaetz stands tall with a height of 5ft. 7inch.( ) while his body weighs around 160lbs. He has fair complexion with brown hair and blue eyes.

Trivias About Matt Gaetz You Need To Know.