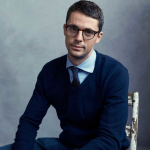 Matthew Goode is an English actor. He made his screen debut in 2002 with ABC's TV film feature Confessions of an Ugly Stepsister. His breakthrough role was in the romantic comedy, Chasing Liberty (2004), for which he received a nomination at Teen Choice Awards for Choice Breakout Movie Star - Male.

What is Matthew Goode famous for?

Where is Matthew Goode from?

When his early life is viewed, the artist put his first step on the earth in Exeter, Devon, England. He grew up in the village of Clyst St. Mary, near Exeter. He falls on ethnicity white with nationality English. His birth sign is Aries and religion is Christianity.
He was born to Anthony Goode and Jennifer Goode. His father is a geologist professionally and his mother is a nurse and amateur theater director. He has five siblings altogether, three from a previous marriage of his mother and two (including him) with his father. His half-sister is a TV presenter, Sally Meen.
Talking about his education, He completed high-school from Exeter School and for further study, he joined the University of Birmingham. Later, he graduated from Webber Douglas Academy of Dramatic Arts.

What Does Matthew Goode do for a Living?

How many awards did Matthew Goode win?

Matthew Goode has received several nominations for his performances in the movies he has appeared in which at the last count was over 40 (both films and TV shows). He was nominated by Film Critics Circle of Australia Awards for Best Actor in Leading Role in 2012 and the Australian Film Institute for the same category in 2013 for his performance in the film Burning Man. He won the Fangoria Chainsaw Awards for Best Supporting Actor in 2014 for his role in Stoker and Palm Springs International Flim Festival for Ensemble Cast Award in 2015 for his role in The Imitation Game.

Who much is Matthew Goode Net Worth?

For his successful acting career, he assumes huge earnings. His estimated net worth said to be $ 3 Million. His main sources of income are Movies, TV films, TV series, and endorsement too.

Who is Matthew Goode married to?

Entering into his personal life, his current marital status is married. He is married to Sophie Dymoke in 2014. They were dating each other since 2007. They have a son, Ralph Goode and two daughters, Teddie Eleanor Rose Goode and Matilda Eve. The couple is living happily and doesn’t prefer to go for divorce issues. His sexual orientation is straight.

How tall is  Matthew Goode?

Observing his physical appearance, the gentleman is blessed with good height with a smart looking personality. He stands at the height of 6 feet 2 inches (188 cm) with a weight 81 Kg. His body type is athletic. His eyes are blue and hair is dark brown.