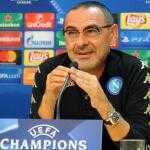 It was the day July 14, 2018 Chelsea appointed Napoli manager Maurizio Sarri of Italian Nationality as a successor of former Chelsea manager Antonio Conte.the Italian agreed upon deal to manage the blues at Stamford bridge for three years.

Maurizio Sarri born on January 10, 2018 in the Bagnoli district of Naples was an amateur footballer in his early life. Sarri never played football professionally. He worked as a banker at Banca Monte dei Paschi dei Paschi de Siena in Tuscany, where his father was born and raised. Maurizio travelled around Europe working as a banker in London, Zurich and Luxembourg as well. Maurizio failed trials as a central defender at Torino and Fiorentina and played only amateur football for Figline. Montevarchi tried to sign Sarri at the age of 19, but the deal eventually collapsed due to high compensation demanded by Figline. Later, Sarri refused to move to Pontedera and retired with Figline struggling with injuries.Sarri started working in the bank in the morning, and trained and played matches in the afternoon and evening.Sarri left his banking career after taking the responsibility of Team Tegoleto so that he could devote himself to the club for better coaching career in 1999 at the age of 40.

Sarri is well known for his smoking habits. As English grounds have a strict no smoking policy, a new Chelsea Manager, 59 year old Sarri will have to face hard times not to lit up a cigarette. During his times in Napoli, Sarri was allowed to smoke in the sidelines. 90 minutes of a match without cigarette will be difficult for Sarri to withstand in English grounds.

Sarri started his coaching career in 1990 for U.S.D Stia in Seconda Categoria and as a manager in 1925. the following year, Sarri managed U.S Faellese and succeeded the club to promote. Sarri also managed U.S.D Cavriglia and U.S Antella and succeeding to promote both clubs to Eccellenza. Sarri was named manager of fellow leage team A.C Valdema in 1998. Year 1999, Sarri took over Tegoleto in the same division leaving his other job as a banker.
Sarri signed for Sansovino in Eccellenza in 2000, and helped the club to promote to Serie D in his first season. In 2003, Serie C2 side Sangiovannese signed Sarri following his success with Sansovino. The club under Sarri promoted to Serie C1 in his first campaign.
Sarri managed Serie B side Pescara in 2005 but only succedded to avoid relegation and resigned from the club in 2006. Sarri was appointed as a manager for second division side Arezzo the same year replacing Antonio Conte. Conte regained his position at the club in 2007 when Sarri was relieved from his managerial duties.
Sarri joined Avellino in the second tier on 18 July 2007 but for a brief period of a month due to severe altercations with the club's board. In December the same year Sarri joined Hellas Verona and was sacked again for winning only a point during his six matches in charge.Manager of Perugia for 5 months in 2008, manager of Grosseto in 2010 for 3 and a half months, manager of Alessandria for a year until june of next year, manager of Sorrento for 5 months, Sarri joinned Empoli in 2012 and promoted the club to Seria A.
Sarri finally signed for home club Napoli after leaving Empoli on 11 june 2015 and led the club to conclude first half of 2015-16 season in 1st place and runner-up at the end of his first season. Napoli under Sarri was titled Winter Champions for the first time in 26 years. The following season, Napoli finished 3rd in Seria A and Sarri received Enzo Bearzot Award when he was voted the league's Coach of the Year. Carlo Ancelotti replaced Sarri's reign at Napoli on 23 May 2018.Sarri was signed by Chelsea on 14 July 2018. He replaced Antonio Conte and finally got a chance to manage an English club. Currently, Sarri is fulfilling his
managerial duty as a Chelsea Manager.

Maurizio Sarri Salary €3million per annum was on the offer and his Net worth of 2018, its under review