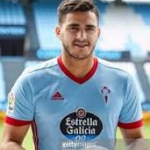 One of the well known Uruguayan famous and professional football Player, Maximiliano Gomez who plays for Spanish club, Celto Vigo and the Uruguay national team. His playing position is Striker, centre forward. Currently, he is playing in Celto Vigo Since July 1, 2017. He is right foot player. His Shirt number is 7. Luis Suarez, Cavani are his best team mate.

Maxi Gomez was born on 14th August, 1996. His full name is Maximiliano Gomez Gonzalez. He was born and raised in Paysandu, city of Uruguay. His nationality is Uruguay. He began his career by joining Defensor Sporting football club.

In 2013, he began his football career as a youth in Defensor Sporting from CA Litoral. On 15th September, 2015 he made his first team debut win against Universitario for the year’s Copa Sudamericana.  Again, On 2015, 4th October he made his Primera Division debut. The first senior goal from him came on October 16 against Montevideo Wanderers in a home defeat with 2-3 score. His first season was with 14 goals in only 21 match which is the very best performance  given by him. In 2016 campaign, he scored 4 goals in 14 matches. On 5th March, he contributed again with 10 goals in 12 matches in the year of 2017 with the score of 2-0 against Danubio.

Gomez signed five year contract deal with La liga club, Celta Vigo in May 2017. He made his first move there in his career. On 19th August, he made his debut for the club scoring brace in a 2-3 loss against Real Sociedad.

In 2017, he made his debut for Uruguay as a substitute against Poland in a 0-0 tie in an international friendly. He gave his great contribution in the field of Football.  He was listed in the World Cup 2018 in Russia in Uruguay’s provisional 26 man squad.  He played one match in World Cup without any goal. He is capped 5 times for his national team.

The height of Maxi Gomez is 1.86 m and his weight is 91 Kg. He is very famous player. Being a famous player, he has not spoken about his personal life and about his relationship. From this, he is a very secretive player.  He might be more focused on his career than in affairs. His net worth is around $1 million as of 2018. He earns annual salary of €4 million from his current club.