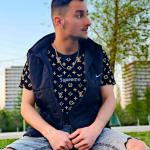 MCqasim with the real name Qasim Khalaf was born on July 30th, 200 in Boza, Iraq. Is a german artist & blogger & german creator with a wide reach

How did MCqasim get famous?

MCqasim started his career in 2014, he created a YouTube channel and published a lot of videos!  In 2017 his videos went through the roof and he founded an e-commerce online shop called MCqasimSHOP through which he sold more than 10,000 products.

What is MCqasim's full name?

MC qasim's last name is actually not qasim.  His full name is Qasim Khalaf, but he chose MCqasim for a short time.  [@mc_qaaim via Instagram] it actually sounds like a rapper's name

MCqasim started its own online shop called MCqasimSHOP in January 2017.  He sells t-shirts, pullover caps, and you can buy the products with his own name at MCqasimSHOP.  [via Instagram]

In addition to a music video, MCqasim has released his debut single 'Glück'.  The catchy pop track is based on MCqasim's relationships and experiences as a successful creator.  He says: "I always send you letters but have no answer back" I'm unlucky in love but I'm chasing my luck [...] But this is supposedly his message was served to his ex-girlfriend!  [in the texts he speaks of disappointments].  "[via YouTube]

MCqasim started with the internet when he was fourteen!  2017 could develop further he founded an online shop called MCqasimSHOP two years later he had a very big success he sold more than ten thousand products!  In 2019 his niche died six months later, he decided to start an online shop called DALYASHOP, a fan asked him why he was starting an online shop with her name DALYASHOP!  but he replied and said "I did not set up this online shop to earn money or to be more successful, I do that so that her name stays and the money I earn from it is donated to poor people who need it".

In 2020 he shows his own house on an Instagram story, he spread a few nice words to his community say "Make yourself proud, make your parents proud, work hard & sleeplessly for your dreams. Make yourself financially free! Enjoy your life!  I want to tell you that everything is possible! A few years ago someone would have told me you will have your own house! I would not have believed!".

In 2021 he released his first song "Glück" this song is about love!  in his song, he says that he was hurt very often by people he loved.

He announced a few days ago on Instagram (mc_qasim) Stories that his own app will soon be available on the Google Play & Play Store.